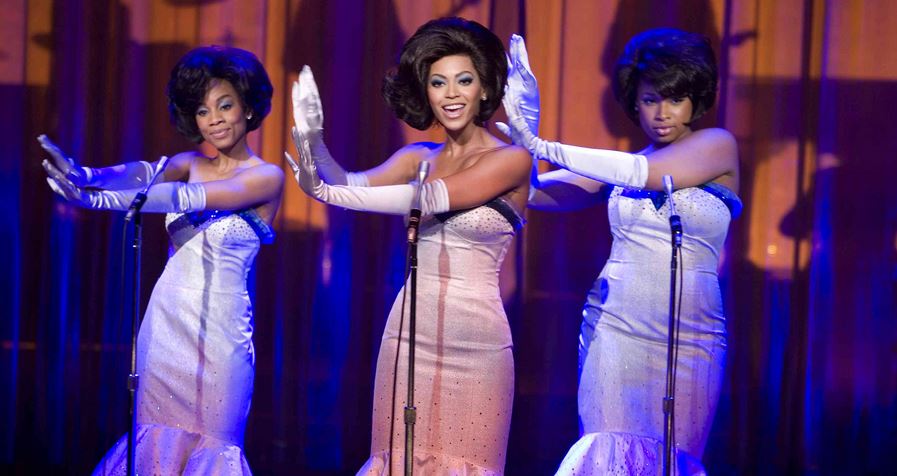 When budding 1960s soul trio the Dreamettes lose a local talent contest, local car salesman Curtis (Jamie Foxx) steps in to offer them a break to the big time, filling in as back-up to James Early (Eddie Murphy).

“We don’t do back-up!” shouts the larger-than-life lead singer Effie (the Oscar nominated Jennifer Hudson), but the others manage to talk her round and success is just around the corner.

Soon, Effie is involved with Curtis and the girls career rockets, as Curtis moulds them to move from the largely black R&B charts to compete with white artists in the regular pop charts.

But the move that brings about big changes is Curtis’s decision to replace Effie as the lead singer with the more attractive Deena (Beyonce Knowles), even though her voice isn’t as strong.

This leads to a conflict between the two girls which threatens to destroy the band and does destroy Effie’s own relationship with Curtis. He even goes so far as to steal a song she performs when she starts her own solo career.

But it’s all about the business for Curtis, as he continues to push his girls to the top in his attempts to conquer the pop charts with as many black artists as he can collect under his wings.

If the story sounds at all familiar, think of Deena, sorry Diana Ross and the Supremes.

The film-makers have been careful to steer just far enough away from the Motown favourites to avoid legal action, but that’s basically the story they’re telling.

The first half of the film is an uplifting, underdog comes good kind of film, about three girls who fail in a talent contest being plucked from obscurity by a music manager who shoots them to international superstardom.

So far, so good and so positive. It’s a typical musical movie – or at least a movie about music, where songs feature prominently, but only in recording studios and on stage.

Suddenly, about an hour in, it kind of falls apart. It turns from a pleasing musical into an operetta, where Effie starts singing her concerns. Curtis resists for a time, speaking back, but suddenly, he starts singing too.

This changes the film completely, and removes any sense of reality.

Another problem is that there aren’t really many songs that you’ll find yourself singing in the days to come – no All That Jazzes or Springtime For Hitlers, to highlight two more successful musicals of recent years – and the emotional roller coaster is rather predictable in its twists and turns.

But if you like big, sparkling costumes, big, sparkling characters and big, sparkling voices, you’ll get a lot out of this film. It would certainly be a more satisfying way of spending a Saturday night than sat in watching the X-factor…the Oscar-nominated Jennifer Hudson, of course, was a reject from Simon Cowell’s ongoing US TV hit, American Idol.