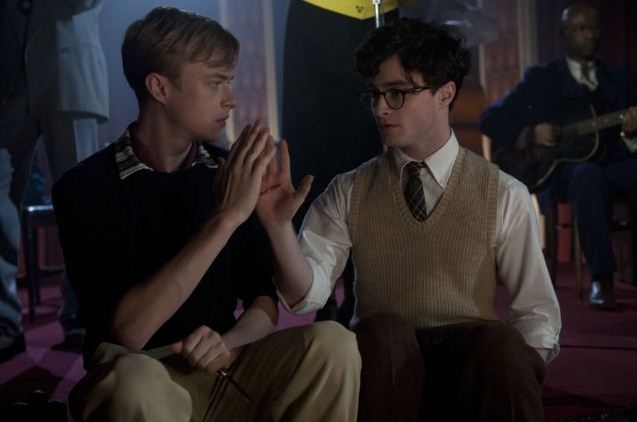 In the early 1940s, a shy teenaged Allen Ginsberg (Daniel Radcliffe) heads to Columbia University where he hopes to learn to be a writer.

One of the first fellow students he meets is the charming but confident Lucien Carr (Dane DeHaan). There’s a clear attraction between the pair.

The four young writers develop a strong antagonism towards traditional literary teaching and develop a drink and drug-fuelled style that would see them remembered as the Beat Generation.

But before they get the opportunity to blossom as writers, Allen’s relationship with Lucien comes under strain when Lucien finds himself taking drastic action to shake off the increasingly unwanted advances of his ever more desperate older lover.

For his debut film John Krokidas is the latest director to study the early years of the Beat Generation writers, most recently visited in last year’s On The Road.

He centres his film on Allen Ginsberg, but the true heart of this story is Lucien Carr’s tragic relationship with David Kammerer. This makes Daniel Radcliffe feel somewhat like an observer in his own film. Radcliffe’s screen persona is certainly more passive than the intensity of Dane DeHaan’s bravura performance.

Rather too many stories combine to give a confusing picture of the tale Krokidas wants to tell. There’s a taste of a young poet, developing his first independent take on the world to inspire his writing – there’s an exploration of young man whose aspirations are held back by troubled parents – there’s a study of young love – and suddenly, out of nowhere, a murder to contend with.

Krokidas creates a keen sense of time and place, with Ben Foster’s William S Burroughs, perhaps best of all, summing up the partying attitude of the time, although there’s little suggestion that homosexuality was more frowned upon in the 1940s than now.