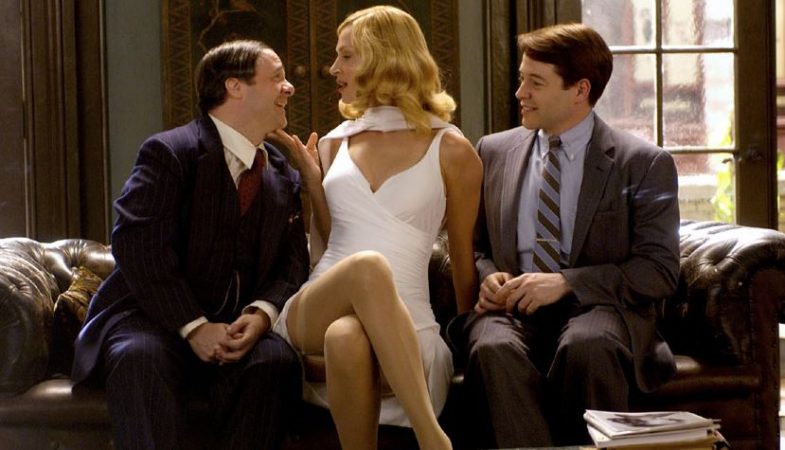 Broadway producer Max Bialystock (Nathan Lane) is down on his luck. Just when he’s on a losing streak, with each successive musical flopping big time, an accountant turns up to check his books. Luckily for him, the accountant is the timid, naive and inexperienced Leo Bloom (Matthew Broderick).

Once Leo overcomes the shock of meeting Max, he sits down with the books. It soon strikes him that in the right circumstances, a producer could make more money from a flop than a hit. Quietly proud of his theory, he’s taken aback when Max takes it seriously and invites him to join him in a scam to find the most surefire flop, in order to rake in cash from investors they’ll never have to repay.

The only problem is that despite sourcing the most offensive musical ever written (“It’s practically a love letter to Hitler”) and hiring the most incompetent company on Broadway to stage the production, something goes horribly right…

At a time when Hollywood’s pumping out remake after remake, this film is excusable for a number of reasons. Although the plot will be more than familiar to anyone who knows the classic 1968 film of the same name, this isn’t a remake of that, per se. The mad mind behind that original film, Mel Brooks, reinvented it as a Broadway (and now West End) musical a few years back, and it’s that that’s now been turned into a movie. Coming from the same “producer,” this feels more like a companion than a cheap imitation of its predecessor. The same film-maker has made the “film of his musical of his film.”

It’s perhaps the most multi-self-referential movie in cinematic history, which seems to be suitably fitting for a film that lampoons the entertainment industry that feeds it.

Anyone who’s seen the stage musical – and there are many of you out there – will find this to be so faithful a transfer back to the big screen that some could argue it’s creatively pointless – other than to give you a closer-view or to get exactly the same material (with much of the same original cast) to a wider audience, although with material that’s this much fun, that’s no bad thing.

All of the actors are clearly having as much fun as Mel Brooks had when he first came up with the cheekily preposterous idea of two Jewish producers trying to make money out of mocking Hitler.

Nathan Lane and Uma Thurman are particularly impressive in their roles – that said, there’s not really a weak link anywhere in the cast, or indeed the show.

For those who haven’t seen the stage version, but know Brooks’ original film, it might come as a surprise to find out just how musical it is – an irony of the 1968 movie was that although it was about a musical, there really wasn’t much music in it – but Brooks has changed that, by writing a number of new songs for his unexpectedly musical cast – some of them likely to become as classic as the original’s “Springtime For Hitler.”

You’d need a heart of stone to sit through this without breaking a smile. It’s so bright and cheeky that even if you’re not particularly a fan of Mel Brooks, it’s a difficult film not to like. And if you are a fan, you’ll be delighted that not only does he not tarnish the memory of one of his best-loved movies, but you’ll remember this for years to come with as much fondness.