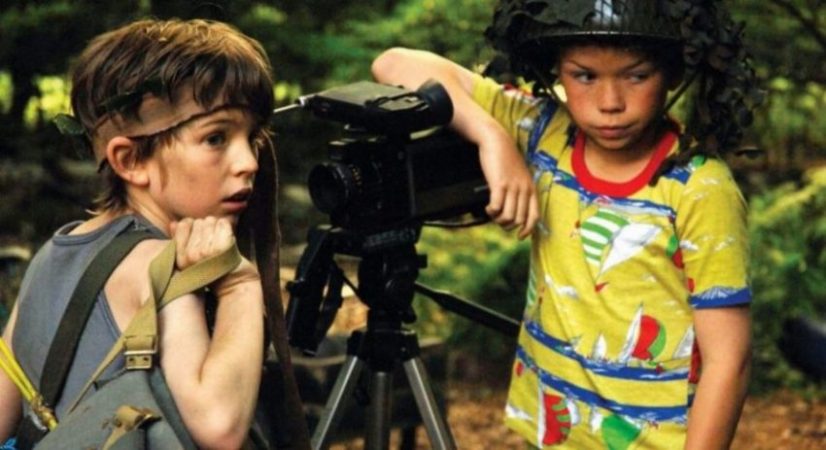 Will Proudfoot (Bill Milner) lives with his devout, god-fearing family in a home that’s one Brother short of a religious commune.

His faith – or more accurately, his mother’s faith – prohibits him from – among other things – watching television, so when the geography teacher plays a video in class, he has to leave the room.

While he’s waiting in the corridor, the school bully Carter (Will Poulter), who’s just been sent out of a neighbouring classroom, starts smacking him about and a fishbowl gets smashed, which results in a trip to the headmaster for both of them.

Carter’s cunning and Will’s naivety unexpectedly combine, resulting in the most unlikely of friendships. During a visit to Carter’s home, Will sees a pirated copy of First Blood, which captures his imagination – and soon, he’s helping Carter shoot his own, stunt-filled version of John Rambo’s first outing.

This is a charming odd-couple film – the cinema-literate school bully and the sheltered wimp, with little in common but a lack of a father-figure and an (in Will’s case, unexpected and newfound) passion for action films, forging an unlikely bond over an early 1980s video camera.

Son of Rambow is clearly made by people who are as passionate about cinema and the film-making process in general as their lead characters are – and anyone who shares that love will be enchanted by the increasingly adventurous film-making techniques employed.

For everyone else, there’s a sweet comedy about two lonely, lost young souls, finding each other – and later themselves – against a backdrop of a school and homes where neither really belongs.

The main storyline is tremendously fun and uplifting, but everything else going on in the background is rather clumsy and unsubstantial.

The deeper drama is slight and simplistic, with most of the relationships with supporting characters feeling rather forced and at times, unnecessary; a whole sub-plot about a French exchange seems to serve little purpose other than to bring in enough extra characters for the finale, amusing though much of it is.

The performances of the two leads are delightful, but almost without exception, the rest of the cast are playing grotesques or caricatures – while Jessica Hynes (Stevenson, to you and me) is rather pointlessly given a role which fails to draw on any of her plentiful comedic talents.

Ultimately, this film doesn’t really teach us as much about the nature of the world or human relationships as it does about low-budget film-making. But it’s a playful romp through two influential weeks that turn two contrasting misfits, from opposite sides of the moral tracks, into responsible young adults, with a better idea of who they are and what they want from life.