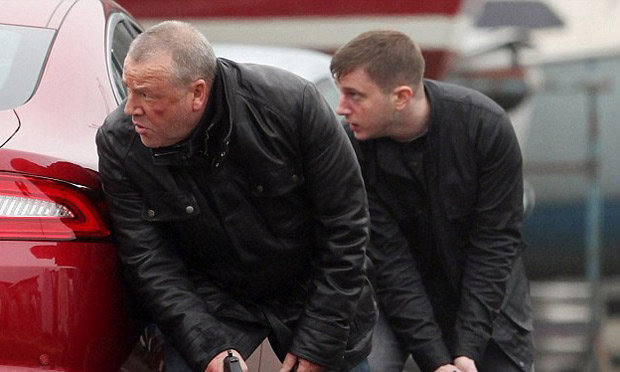 Regan (Ray Winstone) is the no-nonsense leader of the Metropolitan Police Flying Squad (known to cockneys as ‘The Sweeney’ because of the infamous demon barber of Fleet Street). The brightest young member of his team is ex-con-turned-cop Carter (Ben Drew – known in music circles as Plan B).

Regan is having an affair with the Sweeney’s beautiful young thing Nancy (Hayley Atwell), who just happens to be married to Ivan (Steven Mackintosh), the internal affairs officer who’s intent on bringing down Regan and his team for their unorthodox and uncompromising tactics.

We first see these tactics in action as the Flying Squad foils a warehouse bullion robbery by a heavily armed gang – and they’re next put to use to investigate a raid at a small jewellery store, at which a customer is, apparently randomly, executed with a shot in the back of the next at point blank range.

It doesn’t take long for one of Regan’s former collars, Allen (Paul Anderson) to rise to the top of the suspect list, but his care-free brutality helps to keep the Sweeney off his back. Regan’s own boss (Damian Lewis) is also breathing down his neck, imploring him to stay on the right side of the law.

Can Regan, Carter and Co. catch their man without losing any of their own and without falling foul of the officers who seem more intent on arresting fellow cops than those the Sweeney see as the real bad guys?

There’s much to admire in Nick Love’s updating of the 1970s TV classic that saw John Thaw and Dennis Waterman in the shoes now filled by Ray Winstone and musician-turned-actor Ben Drew.

For what is clearly a UK-sized rather than a Hollywood budget, the car chases are exciting and one particular chase scene, with armed men gliding in pairs on foot through a packed Trafalgar Square, The Mall and St James’ Park is beautifully choreographed and reminiscent of Heat in its ferocity.

The aerial shots of 2012 London make the city look stunning, although the clinical interiors – clean whites and dirty greys – are where the film starts to stray too close to cliche.

Ray Winstone’s Regan, with his growling cockney wise-cracks and an uncompromising efficiency, is a cliche that’s a pleasure to watch, but throw in an extra-marital affair with the wife of the cop who’s trying to shut down his operation and having him caught between internal affairs on one-side and the most ruthless armed robber sin history on the other, the narrative begins to veer dangerously close to parody.

There’s a lot less to Ben Drew’s low-key performance as – cliched, as it is – a youngster with a dubious past, rescued from a life of crime and given the opportunity to fight it instead. He does perfectly well, but you’re left wondering how versatile he might be as an actor in the future – mind you, being limited to one character didn’t harm the likes of Jason Statham.

And the pastiche continues; the armed robbers seem to have gone to the big-screen baddies’ shooting school, where they’re taught how to miss, despite spraying hundreds of rounds, indiscriminately around crowded tourist traps – and for the other big set piece, a car chase through a caravan park towards the end of the film, when the budget is clearly running out, there’s not a single person on the site.

The film-makers were perhaps unlucky with their timing, as it all feels a little anachronistic; in one scene, the Shard is half built, but five minutes later, it’s fully built. But the timing feels odd elsewhere too; one minute, they suffer wounds to their faces, but some time later, the wounds are every bit as fresh, and having internal affairs setting up in the corner of their office doesn’t really excuse some 1970s practices in the modern day.

Many of the set-ups don’t pay off; much is made of the fact that some gold bars seem to have been taken from the scene of the opening robbery, but this is quickly forgotten and there’s no other suggestion that any of them are in any way crooked. In TV’s The Shield, Regan’s equivalent, Vic Mackey, cleans the streets by taking back-handers from crime bosses, allowing his favoured criminals to take out their rivals and knocking off cash from gangsters. Here, they don’t get much more naughty than throwing baseball bats at fleeing foes.

There are many other illogical plot points during the narrative; the boss sends our protagonists off to a rendezvous with the bad guys with his blessing, but it fails to occur to him that they might need back-up – and it would seem odd for ruthless gangsters who’d kill their own mother to shoot a cop at point blank range in his visible bullet-proof vest, when his unprotected head was only a couple of inches higher.

It would be churlish to suggest that despite its short-comings, Nick Love’s version of the Sweeney isn’t enjoyable. The film is fast-paced and entertaining, if somewhat incoherent and stylised, but with most of the characters doing no more than walking around minimalist offices with amazing views over the City of London, it feels more like a feature-length pilot episode for a rebooted TV series than a film that belongs on the big screen.