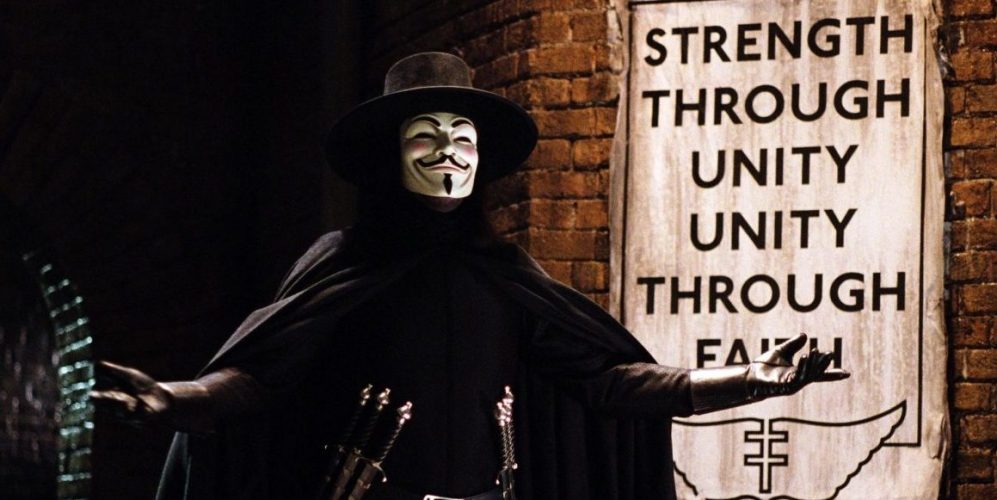 The near future. Britain is under the iron fist of a fascist dictator, Chancellor Sutler (John Hurt), who rules by barking orders, via a video-link, at his team of henchmen, including the police chief Finch (Stephen Rea) and his ruthless security head, Creedy (Tim Pigott-Smith).

His route to the top was dirty, riddled with death and corruption.

One of the few to live to tell the tale – just – has set out to wreak his revenge on the powers that shouldn’t be, the only way he can – fanning the flames of discontent to secure support for his plan to launch a terrorist attack on the very heart of London.

Hiding his true identity with a face-mask representing his precursor, of sorts, Guy Fawkes, he’s known only as V (Hugo Weaving), as he prowls around the dark, alleyways of the capital, administering his own brand of summary justice to the evil figures lurking in the shadows.

One fateful night, he rescues an innocent TV assistant Evey (Natalie Portman) from the secret police who are about to rape her, drawing her unexpectedly but inexorably into his plot.

The film – based on a 1980s graphic novel, published during the Thatcher years – tackles some interesting political and philosophical ideas. Do some administrations deserve to be undermined by force? Is V a terrorist leader or a freedom fighter? Or merely a poor, wronged soul, out for vengeance? Who might be his present-day equivalent, using modern media to brainwash his followers to rise up against an all-powerful leader who uses force to stamp his authority on the world?

Visiting themes that unquestionably make you think deeply about the world as it is, was and could be in the future, and blessed with exactly the kind of stunning visuals you’d expect from a production that shares its origin with the team behind the Matrix (Joel Silvers producing a Wachowski brothers script), it turns out to be an unexpectedly overblown disappointment. It’s the epitome of a wasted opportunity.

The film is emotionally bare, with its two main characters failing to connect convincingly with the audience or each other: V’s fixed face means the only clues to his feelings are in his unchanging voice and theatrical mannerisms while Portman spends her screen time trying – and failing – to hit the English accent (sounding 30% Australian and 70% South African), rather than considering Evey’s interaction with the supporting characters. To be fair to her, though, how tough must it be to feel any kind of warmth or sympathy towards someone whose features sit as solid as those of Nelson atop his column.

Without exception, all the other characters are stereotypes.

If there’s a point to be made, it’s lost in an overly theatrical, melodramatic and generally incoherent mess. Either the caped crusader has a spare wardrobe for lady callers in his dungeon residence, or this woman, essentially kidnapped from her office, with nothing but the clothes on her back, inexplicably manages to produce a year’s worth of outfits from nowhere. Perhaps the most wanted woman in the country pops out to the shops unnoticed, or nips back home, despite the fact that barbarous heavies are hanging around her apartment like the proverbial flies around you know what.

Then there’s the incongruity of a 1950s Wurlitzer, nestled uncomfortably among medieval suits of armour and high art. This would seem odd, even if it weren’t for the fact that a decade hence, anyone who wants to store hundreds of songs on one contraption would probably choose a pen-sized MP3 player, rather than a jukebox the size of a small car. This list goes on, and on…but it’s just picking really. There are more fundamental problems.

The film is set over the period of a year, but you get no sense of time passing – except for the fact that towards the end, it drags to the extent that if feels that you’ve been in your seat for a year.

And while V’s key message appears to be that ideas are more important than the people who embody them, he seems to contradict his own argument by motoring towards his goal of destroying an historical and architectural icon, rather than the sadistic individual who happens to be its undeserved incumbent.