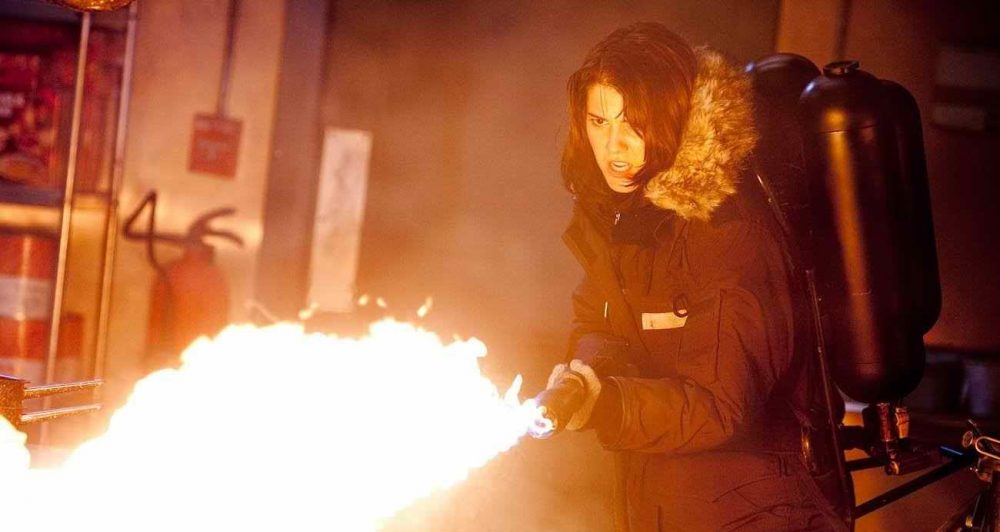 When a team of Norwegian scientists find the body of an alien encased in ice, beside a crashed space-craft, buried deep beneath the surface of Antarctica, their leader, Sander (Ulrich Thomsen) recruits paleontologist Kate (Mary Elizabeth Winstead) to help him extract the creature.

The American pilots who fly them to their remote base, Carter (Joel Edgerton) and Jameson (Adewale Akinnuoye-Agbaje), join in the celebrations when the scientists manage to get the remains – still encased in ice – back to the research centre.

During the party, the creature – thought to have been dead for thousands of years – springs back to life and escapes.

Sander and his team are keen to find it so that they can continue their research, but Kate is worried that it won’t be that simple.

She’s quick to realise that the beast might not have escaped at all; it appears to be able to replicate any living being it touches, so it might already have killed any of the rest of the team and be masquerading as them.

Armed with only a flame-thrower, Kate has to devise a way to find out who she can still trust to help her kill the alien and escape back to civilisation.

Bits of this plot might sound familiar – to anyone older than 40 or fans of early 80s horror films – but rather than being a remake of John Carpenter’s alien invasion classic of the same name, it’s actually a prequel.

Adding a couple of women to the mix isn’t a narratively smart enough way to modernise a three decade old tale. OK, so the effects are clearly more modern, but little else changes with them – not just in this film, but in the genre as a whole; an alien in a confined space with a finite number of humans, arguing among themselves over what to do with it – the humans being killed off one-by-one – the paranoia – resourcefulness – claustrophobia – lack of trust – blood, guts and whatever the inside of an alien is called – and of course a healthy dose of cliché-ridden science fiction.

If a film is exciting or surprising enough, the pseudo-science doesn’t have to be convincing for it to work – you allow it more leeway – but for a film this derivative to work, it has to feel absolutely real, and so much about this fails to click into place.

Perhaps it’s unfair to accept that an alien could have the power to recreate organic material but to feel it’s a bit of a stretch for the clone to speak with the same Norwegian accent and remember how to hot-wire a caterpillar truck.

Maybe it’s churlish to accept that an alien could have survived for a hundred thousand years under the ice but not to believe that sometimes it just turns into a human, while other times it seems to hide inside the skin but remain intact and when it breaks out of the human, it’s suddenly twice the size. And unless this film is set on the spring or vernal equinox, it seems unlikely that days and nights would come and go as they do at the south pole.

The film-makers clearly have to throw in things that seem unlikely in order for us to be surprised when the resultant twists emerge, but if they’re not clever enough, they feel illogical or contrived, even within the world that’s been created for us.

It also follows the predictable pattern of native-English speakers last the longest and seem the most normal.

For anyone who hasn’t seen Carpenter’s antecedent or fans of the genre, this Thing is a perfectly enjoyable sci-fi horror, but it doesn’t really stand up to scrutiny, not in comparison with the original or other more imaginative creature features.