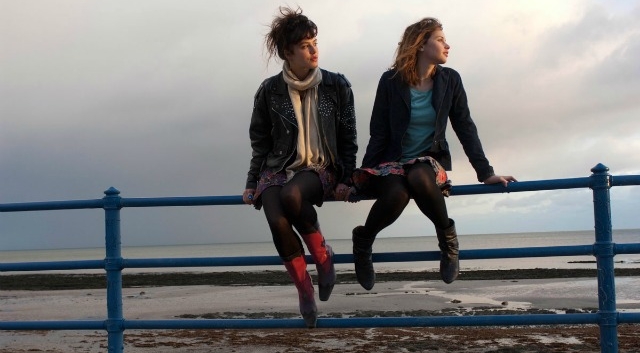 Teenaged Beth (Felicity Jones) lives with her parents in the seaside B&B owned and run by her parents, Joa (Julia Ormond) and novelist Jonathan (Sebastian Koch).

Well – I say novelist, but Jonathan is still living on the glory of his one successful book, several years earlier and has been struggling with his second ever since.

When the chambermaid is fired, they hire the young Emilia (Jessica Brown Findlay) to take over, but she doesn’t seem too interested in that job – she has an ulterior motive.

Believing she’s related to Sir Arthur Conan Doyle, Emilia is determined to follow in his footsteps and become a writer.

She manages to work her way into the lives of both Beth – as her closest friend – and Jonathan – taking secret writing lessons in the attic, behind Beth’s back.

With Jonathan tiring of Joa’s nagging and reveling in the admiration of the gorgeous, flirtatious and very young Emilia, he simply can’t help himself – and when the secret comes out, Emila’s friendship with Beth shudders to an inevitable halt.

The whimsical chambermaid’s arrival at the B&B has thrown her own life and those of the family she infiltrates into disarray – in a way worthy of a novel.

Albatross looks and feels like a low budget British film – shot cheaply, thanks to tax breaks, in the Isle of Man for the south coast, with a small cast and simple locations.

It’s effective in its sensitive handling of the themes at its core; loneliness and creative frustration.

But the way the plot unfolds feels less like a feature film and more like an episode of a TV drama – some of the acting feels equally confined.

At times, it feels a little arch – with scenes structured in such a way as to nudge the plot along or to bring out a particular character trait that we wouldn’t otherwise see.

You can feel Julia Ormond’s frustration, but there’s very little to like about her character – Felicity Jones, while coming across perfectly well, doesn’t have much of interest to do.

The film belongs to the despondent Sebastian Koch and his overconfident, bright and breezy muse, Jessica Brown Findlay — his vulnerability and insecurity — her sense of ambition — and their shared need to be create and be loved.

There’s a lot of warmth in the film, but the plot seems a little clunky and contrived and too few of the characters have enough to do to justify the big-screen experience.

As a one-off TV drama for a Sunday afternoon, it would probably receive an extra star in its rating, but it’s not a film that does much to advance British film in an exciting or meaningful sense.