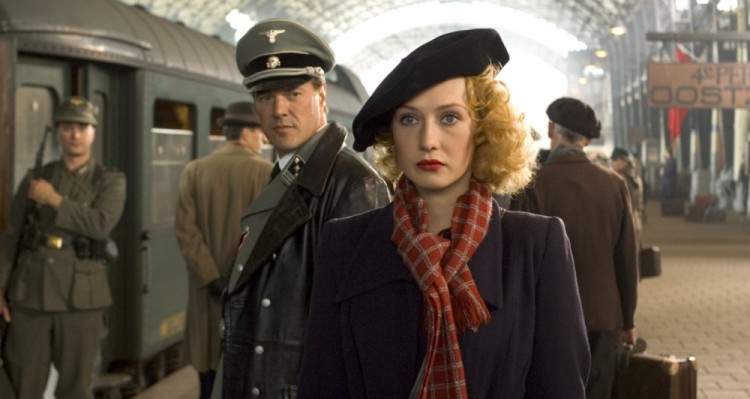 In 1944 Holland, Jewish nightclub singer Rachel (Carice van Houten) is trying to flee to safety when the boat she’s on is ambushed by a Nazi death squad. Everyone on board is sprayed with bullets. Only she survives.

Rachel hooks up with the resistance, who give her a new identity, Ellis, and set her up as a spy. Her first job is to infiltrate the local Gestapo HQ and seduce the boss, Müntze (Sebastian Koch).

Getting a job in his office, she surprises herself by genuinely falling for the sympathetic SS officer. The nice Nazi, is of course a rarity – Ellis’s new best friend Ronnie (Halina Reijn) works – both professionally and personally – for Müntze’s number two (Waldemar Kobus), who turns out to be the leader of the boat ambush.

But to skew the stereotypes, as well as a good baddie, there are bad goodies. When the resistance launch a bold attempt to rescue their leader’s son from the cells beneath Gestapo HQ, the Nazis have been tipped off, but by whom?

Even when the war is over, the film is far from finished – there are scores to be settled on both sides, before the surviving characters can rebuild the lives, shattered by the horrors of the holocaust.

Having started making grown-up films in his native Netherlands, Paul Verhoeven moved to Hollywood in the 1980s, and brought us the likes of Robocop, Total Recall, Basic Instinct, Starship Troops, Hollow Man and of course, the risible Showgirls. This is his first film back home for nearly twenty five years.

Happily for him, he’s given us a film that’s as exciting as the best of his American movies, while displaying the maturity of European productions.

There’s a lot going on here – it’s a long film, but enough happens that you don’t notice. The plot is complex and certain subtleties might be lost to people who can’t tell the German dialogue from the Dutch, but if you give it the attention it requires, your patience will be rewarded.

The characters are as complex as the plot, with likeable Nazis and nasty resistance fighters. This is very much down to strong performances througout the ranks of Nazis and the resistance.

The action is non-stop, glossy and undoubtedly tense and exciting, with everything from gunfights to car chases and lynch-mobs.

Towards the end, as some of the twists unwind, the plot and characterisation begins to unwind a little too, verging on the unconvincing, but on the whole, it holds your attention and just about allows you to suspend your disbelief as far as the closing credits.