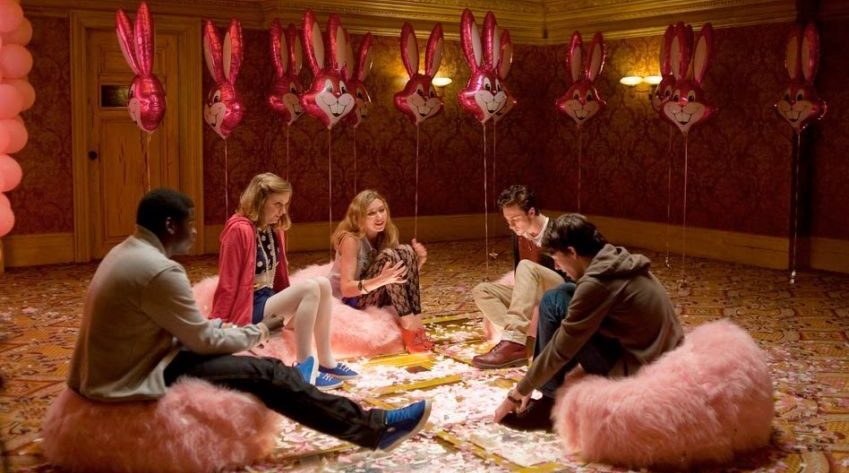 William (Aaron Johnson) is a cantankerous teen who’s fed up of living in the shadow of his perfect older brother and their successful author mother.

The almost gorgeous Eva (Imogen Poots) can’t quite handle the fact that however cute she is, she’s too short to be a model.

Emily (Hannah Murray) feels unloved by her mother and will go to almost any length to secure affection.

Streetwise Mo (Daniel Kaluuya) is into pretty much anything cool.

With so many fragile characters socialising in their own world, it takes only one strong-minded individual to mess with the minds of the others and no-one from the outside can stop the chaos that’s about to ensue.

This is ultimately a film about internet bullying, effective in portraying the way that the bully works slowly to build the trust of the group before exercising his power by turning his venom on the weakest of the bunch.

A big difficulty with the film, though, is the key characters. Some of them – or at least their motivations – aren’t entirely convincing and none is particularly likeable.

Only Eva and Mo are the kind of people any normal folk might chose to hang around with and they’re largely subsidiary to the drama we are asked to get excited about.

Coming, interestingly, from the Japanese director who brought us the Ring franchise, at least the visuals are interesting, as he manifests the internet chatrooms in real-life situations, each represented by gaudy, idiosyncratic rooms off a soulless corridor, with intercom buzzers on each door to reflect the password system of entry.

Sadly, like so many films, it’s visually original but thematically tired and emotionally empty.