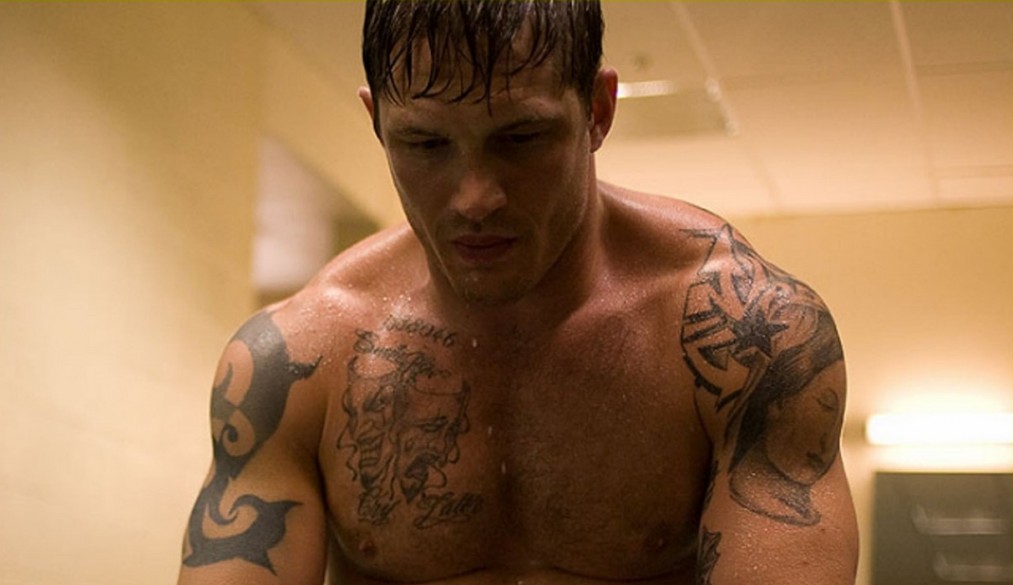 Paddy (Nick Nolte) is an ageing, recovering alcoholic from Irish stock, living alone in a run-down home, with nothing or no-one to keep him company except Jesus and the audio-books he listens to in his car.
When he comes home from church one day, he’s shocked to find his estranged son Tommy (Tom Hardy) waiting on his door step. With shoulders like an ox and a temperament to match, Tommy is back in town for one thing – he wants to return to his one true passion, fighting mixed-martial-arts style, and there’s no-one better to coach him than his old Dad. This is not about reconciliation, he insists; it’s just about the fighting. It’s not about keeping fit, either; it’s business – he’s got his eyes on the prize pot of a big money tournament just a few weeks ahead.
Meanwhile, over the other side – the posh side – of town, Paddy’s other, more modestly proportioned son Brendan (Joel Edgerton) appears to be enjoying an idyllic existence with his wife Tess (Jennifer Morrison) and kids.
But his life isn’t as perfect as it first seems. He’s estranged from both his brother and his father – and after a career as a prize-fighter, is now working as a high school physics teacher. But when the bank threatens to take back his house, he enters a small fight to try to win some cash. He succeeds, but the school finds out and he’s suspended.
With no job and the bank on his back, he’s running out of options? Pride won’t let him let down his wife and kids, but what can he do? Oh. Hang on. There’s apparently a big-money tournament just a few weeks away, so perhaps he can get back into training and pull those gloves back on?
You don’t suppose that despite both having been out of the ring for years and facing competition from the biggest and meanest mixed-martial-artists in the world, they might both qualify for the tournament, leave the other contenders on the canvas end up meeting in the final, do you?

OK, so this is riddled with clichés, but it’s not really any the worse for it.
We’ve got two brothers, estranged from each other and from their father.
We’ve got one brother from the good part of town, with a gorgeous wife and kids, but who’s threatened with losing everything he’s fought for. And then there’s the other brother who – apart from a tour of duty in Iraq – has never made it out of the bad part of town and has nothing going for him but his shoulders and his fists.
We’ve got a recovering alcoholic, who’s being kept going by his faith.
Then there’s the dream – the pot of gold at the end of the rainbow – and a chance that through training together or punching each other’s lights out, family relations might be restored.
With two underdog fighters striving for success, there’s a sense in which this feels a bit like two Rocky films stuck together, which partly explains why the film comes out at nearly two and a half hours – far too long for a film of its ilk. It takes an hour and a half to get to the big tournament and then there’s a full hour of round after round of bloody fist-fights.
Tom Hardy keeps you gripped to the screen through the slow or repetitive bits though, less so Nick Nolte, who’s a little bit too much of a one-note moping old misery, as his character demands. Joel Edgerton – his Australian accent popping out only once – and Jennifer Morrison are a typical suburban couple that could’ve been plucked out of any US TV drama.
The bouts are as exciting to watch as others we have seen in films as recent as The Fighter and The Wrestler or as old as Raging Bull or indeed the Rocky films, making it a worthy addition to the fighting-film genre and while corny, the family drama fits neatly alongside the action – whether it’s the deeply engrained problems between the men or the nervous wife, unable to watch her husband being pummelled by giants in the cage. But it’s unlikely to follow those predecessors into the real-life contests for awards recognition – except perhaps Tom Hardy, who would certainly win the prize for Best Shoulders.
But while he makes a thoroughly convincing fighter – a veritable monster of the ring – Edgerton’s slighter figure and more passive personality feels rather out of place, winning his bouts by almost default. This makes us feel a little cheated, although in truth, it’s certainly more realistic than it would’ve been had David left Goliath a heap of bones on the canvas, time after time after time. But while one such win might be believable, having him make it through to the final is a little too much of a stretch of credibility.
Like only Hollywood sports films can, it will take you on an emotional roller-coaster, have you holding your breath and sitting on the edge of your seats and sharing the emotions of those in the on-screen crowd, regardless of whether you even like watching people fight; it’s as rousing a sports film as you’re likely to see this year, but that doesn’t make it a good film – just a skilfully made one. Even the upcoming Reel Steal succeeds in tugging on the heart strings and that’s about boxing robots!

WHAT ABOUT ALL THE VIOLENCE?

One of the most remarkable things about this film – the suitably titled Warrior – pretty much a string of violent blood-letting, bone-breaking fights, stitched together with a handful of sparring scenes – whether it’s verbal sparring between fighting relatives or training punches in the ring – is its certification. 12A.
The British Board of Film Classification’s explanation refers to “frequent moderate sporting violence.” Frequent? Oh yes. Moderate? Well, that’s the interesting thing.
The censors, who watch films with an even more critical eye than us critics, remark that the training and fighting takes places “within a genuine sporting context.”
They note that while there are heavy blows, there is very little shown of the fists making contact with their opponents. And almost A-Team-style, even the defeated fighters don’t display the wounds you might expect to see if the same man had received the same punishment outside a bar in an 18 certificate film.
It is acceptable, according to the censors, that while in one scene, we hear a bone break, visually, there is no sight of any obvious injury other than “the arm being held limply.”
The BBFC’s own guidelines say that “moderate violence is allowed; but should not dwell on detail, there should be no emphasis on injuries or blood.”
Now, far be it from me to say the censors aren’t tough enough, and it’s true that this fighting is all in a sporting context and perhaps the editing is clever enough that as an adult, you feel you’ve seen more than you have.
But sometimes, when you see the way such definitions are applied to the facts, you wonder whether perhaps Bill Clinton did not have sexual relations with that woman after all?