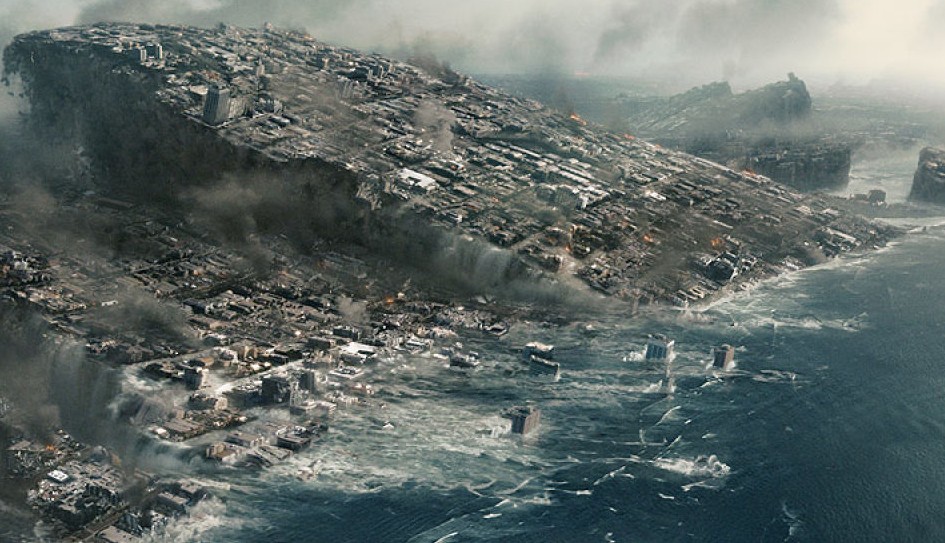 US Army veteran Ray (Dwayne Johnson) now works for the LA Fire Department as a rescue helicopter pilot. He’s taken a day off to drive his daughter Blake (Alexandra Daddario) to university in Seattle, but gets called back to work because there’s been an earthquake at the Hoover Dam.

Not to worry though, as Blake’s soon-to-be step-dad Daniel (Ioan Gruffudd) is a billionaire property developer, heading to San Francisco for a meeting, so he offers her a lift in his private jet.

But just as seismologist Lawrence (Paul Giamatti) predicted, this earthquake is about to rip apart thousands of miles of the San Andreas fault, threatening every city along America’s west coast with utter devastation.

When Ray discovers that his soon-to-be ex-wife Emma (Carla Gugino) has been caught in a collapsing building in LA, he turns his helicopter around to go to rescue her, but before long, they find out that Blake’s been abandoned in one of Daniel’s collapsing skyscrapers in San Francisco.

Ray and Emma will stop at nothing to make the four hundred mile journey north to find their daughter, on a mission that will challenge their decision to separate.

Sometimes, Hollywood is content just to offer audiences a big film, regardless of any plot or dialogue – and if big is what you’re after, big is what San Andreas will deliver – from its protagonist, and they don’t come much bigger than the actor formerly known as The Rock, to the scale of the destruction – almost every building in every major city on America’s west coast crumbling like sandcastles as a tsunami sweeps across San Francisco’s Bay Area.

The character list is laughable – a rescue pilot, his self-sufficient daughter, his estranged wife, her billionaire boyfriend, the charming English chap the daughter encounters along with the younger brother he’s brought to a job interview, a geeky seismologist, a TV reporter who seems to be the only one in Los Angeles, just happening to be in the right place to cover all the action – whether it’s a girl being rescued in the opening sequence or the seismologist discovering that he can predict earthquakes and needing a TV crew to help him warn people to flee their homes.

But even more laughable than this list of caricatures is a script that almost seems to result in the characters themselves rolling their eyes as they deliver one cheesy line after another as divorce papers arrive on the very morning that the biggest earthquake in history strikes – which also happens to be the very day that his estranged wife is meeting her new fiance’s ex-wife (a peculiar cameo from Kylie Minogue) and the very day that Lawrence discovers that he can predict earthquakes – before Ray manages to find Emma in the rubble of a collapsing Los Angeles and the pair just happen to be passing the very building where their daughter is trapped at the very moment she’s looking out of the window. Not to mention the way characters seem to be able to travel hundreds of miles in a matter of minutes, when required to by the plot.

But while it’s laughable, in so many ways, it feels like we’re laughing with the film-makers, rather than at them, as every step of the way, this shameless romp seems to revel proudly in its nonsensical narrative as it wows viewers with some of the biggest special effects in years, although oddly, for a film that’s little more than its visuals, the director hasn’t taken full advantage of the 3D; there are no buildings toppling towards the camera and the audience never feels that a tsunami could flood the cinema.

What actually makes a nice change is that rather than this being a film about how one guy saves the world – and in the case of Dwayne Johnson, you might well think that’s what they’d have gone for – it’s simply a personal tale about how one guy is trying to save his family.

It’s a personal tale, a spectacular and entertaining tale but a very silly tale.