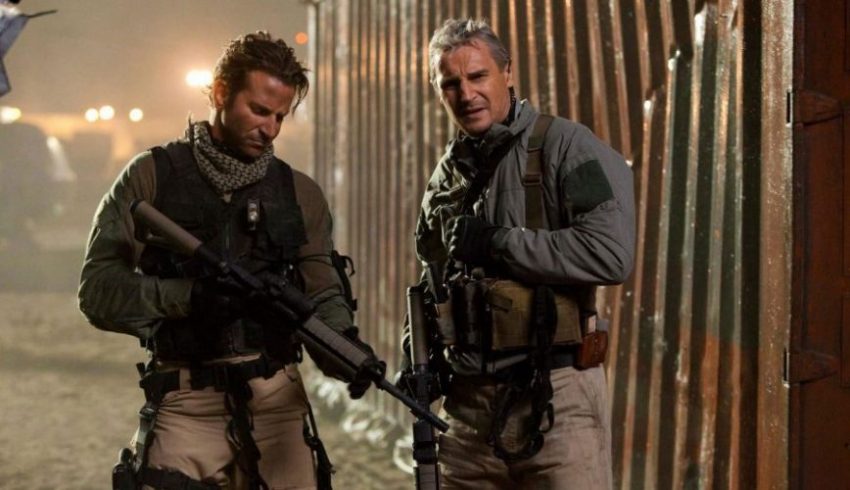 Ranger Hannibal Smith (Liam Neeson) escapes from a Mexican drug-lord’s henchmen and dogs and rescues his comrade Face (Bradley Cooper) from almost certain death at the gangster’s ranch, after enlisting help from disgraced ranger BA Baracas (Quinton ‘Rampage’ Jackson). At a nearby army hospital, they hook up with crackpot pilot Murdock (Sharlto Copley), who flies them to safety. Just.

After several successful commando missions as a team, they find themselves trapped between a rock and a hard place, with a CIA agent Lynch (Patrick Wilson) hiring them to retrieve plates for printing cash from Iraqi insurgents, against the advice of their commanding officer.

When things don’t go to plan, the group find themselves convicted of a crime they didn’t commit (Remember? From the 1980s TV show?), scattered throughout several military prisons.

Some months later, Lynch finds Hannibal in jail and cuts him a deal – if he can retrieve those plates from the rogue security operatives who took them last time, the A Team’s criminal records will be cleared.

Hannibal escapes – and one by one, breaks the rest of the team out of jail – and they set out to clear their names and reclaim their lives.

But with drug lords, rogue agents, the CIA and the military all on their tail, the A Team are going to need all the resources at their disposal – and more – to pull off a daring scheme and restore their honour.

The second of this week’s 1980s remakes, this updates a TV show rather than another film (Karate Kid). Anyone who grew up in the 80s will remember the weekly tales of a “crack commando team, jailed for a crime they didn’t commit,” who break out and become “soldiers of fortune.”

On one level, this is a harmless nostalgia trip; the eccentric characters – the cigar smoking Colonel Hannibal Smith, the Mohican wearing, flight-fearing muscle BA, the smooth-talking good-looker Face and the cutely insane pilot Murdock – return, with varying degrees of fidelity (Bradley Cooper and newcomer Quinton Jackson do the best jobs of mimicking their predecessors, while Liam Neeson feels like he’s at a fancy dress party) – but the mood is very different. What was a generally warm, charming and light-hearted romp, featuring the gang shooting everyone but killing no-one, while building tanks out of cereal packets, has become just another action movie, with a typically incoherent plot, so complicated you soon lose the will to work out what’s actually going on.

And rather than feeling like an extended episode of the TV show, with the A Team on a forward-looking dash for cash, this film is more of a prequel to the series – showing us how they were framed for the crime they didn’t commit – ending, rather than starting, with the classic voiceover, suggesting that if you have a problem and no-one else can help, you might want to hire – the A Team.

The choreography is remarkably imaginative – it’s always impressive how producers can come up with interesting and original action sequences that still feel fresh, even if they’re nonsense – doing the cup-and-ball trick with ship containers on a dockside is ridiculously improbable, as are the consequences.

George Peppard has long since left us and Mr T is nowhere in sight, but the original Face and Murdock, Dirk Benedict and Dwight Schultz both make welcome cameos – but they appear alongside their modern-day counterparts over the closing credits, rather than in the film itself.

Anyone who saw the recent The Losers – about a crack team of commandos, framed for a crime they didn’t commit, who get involved in black operations while they’re trying to clear their names – will feel that we’re in familiar territory here. But while that smaller film came unencumbered with big names and the provenance of a much-loved TV show, the stakes are much higher here. And particularly after the relative success of its big-screen pace-maker, the A Team has further to fall.