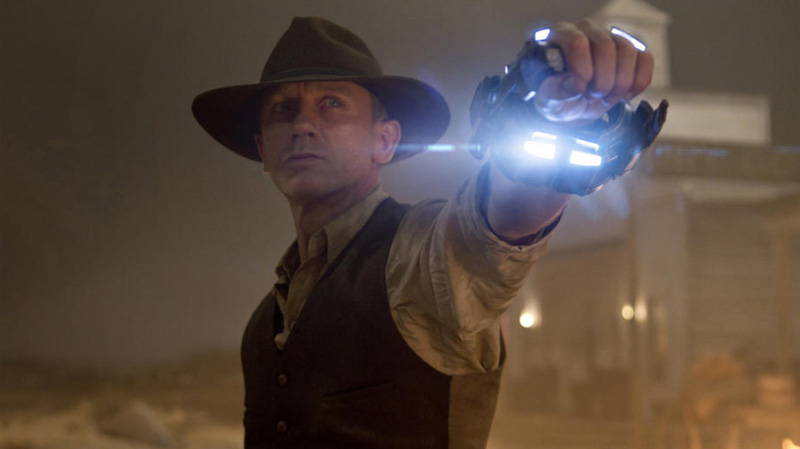 It’s the 1870s and Jake (Daniel Craig) wakes, dazed, in the Arizona desert, having no idea who he is – where he is – or indeed how he got there.

The only clue is a mysterious metal bracelet that he can’t remove.

Moments after he comes around, three outlaws arrive and try to steal what little he has on him. His innate fortitude enables him to overcome the three, take a gun, horse and hat, and ride into the nearest town, Absolution.

But when he rides into town, he finds that residents have been mysteriously disappearing – and although he doesn’t know who he is, many of the townsfolk think they do and he soon finds himself in the custody of the local sheriff.

Absolution is under the thumb of a local cattle rancher Dolarhyde (Harrison Ford), who knows that without his business, the town is nothing. His son Percy (Paul Dano), takes advantage of this fact and pretty much gets away with everything short of murder.

So far, so typical Western – except perhaps the bracelet.

Now, instead of the biggest threat to the livelihood of these cowboys being the local tribe of Red Indians, it turns out that the disappearing townsfolk have actually been kidnapped by visiting aliens, collecting them in an underground gave to power their wild-west base.

Now it’s back to the typical Western plotline of the locals putting aside their differences and working with the outcast outlaw and his mysterious wrist-mounted laser-cannon to save the town – and in this case, the planet.

The idea of sending aliens to invade the pre-sci-fi age is inspired. If an alien landed in central London now, we’d all be scared, but we’d look up in wonder and say “Oh look – an alien’s landed” and the news reports would say “Aliens are invading.”

It would be shocking, but we’d know what was going on.

But imagine how it would have been for the residents of a small wild-west town in the late 1880s, where few people would ever have heard of Mars, let alone entertain the prospect of little green men from our planetary neighbours visiting with malice aforethought.

But despite being produced by Steven Spielberg, directed by Iron Man’s Jon Favreau and starring some of Hollywood’s brightest lights, the film falls disappointingly flat.

The big problem with this is that as a Western, it works well. Daniel Craig is impressive as the archetypal “man with no name” and the interplay between Harrison Ford’s rancher, his spoilt brat son, the local lawmen and Sam Rockwell’s saloon-owner provide a strong set up for an effective cowboy film.

But the arrival of the aliens, rather than giving the film a jolt of excitement, has the opposite effect.

Initially, we see only their space-ships, which – while impressive – aren’t any more impressive than anything we’ve seen before. The way they kidnap the townsfolk is visually interesting and the choreography of the action scenes is, as you’d expect, tight and exciting.

But the back-story of the aliens, the way the plot unfolds and resolves and the interaction between cowboys and aliens all feels flat and more complex than we can be bothered to decode.

Perhaps the oddest miss of this film is the mood. The title, the set up and certainly the bright, crisp photography and set design all seem to be begging for humour; the film provides itself with opportunity after opportunity for visual gags or sly cultural references – but it shirks them over and over again. Cowboys & Aliens takes itself astonishingly seriously. Daniel Craig is a gruff and sombre presence, which works in the context, but it would surely not have been beyond the capability of his colleagues to hang humour off his straight back. It’s fun, but it’s not at all funny.

Cowboys & Aliens is half a good cowboy film and half an average alien film, but from those involved, you’d expect something considerably more stellar.