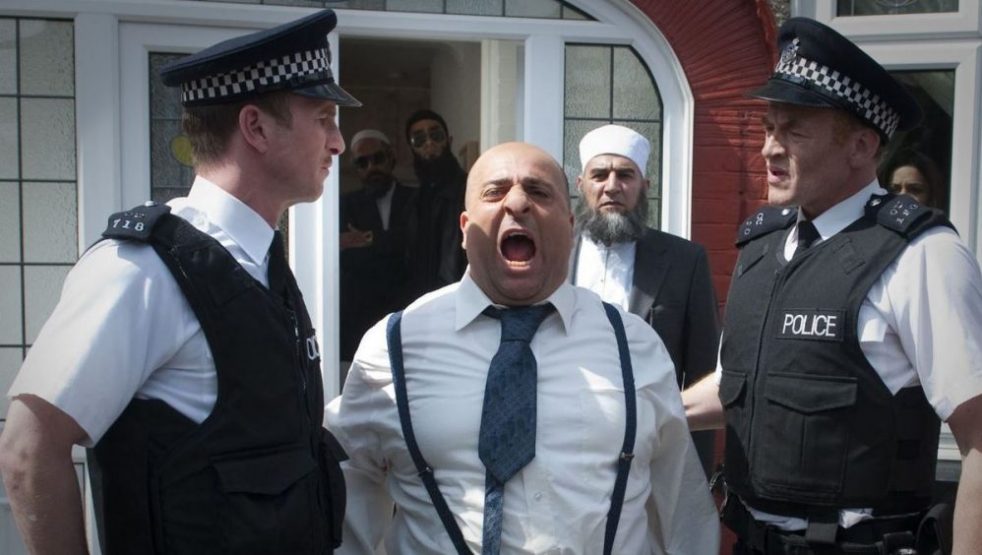 When Muslim minicab driver Mahmud Nasir (Omid Djalili) is clearing up his mother’s east London home after she dies, he finds documents showing that he was adopted.

On further investigation, he’s horrified to discover that he was born…Jewish.

Struggling to come to terms with his new identity – an identity he needs to keep secret, both through shame and the fact that his son is engaged to the daughter of a fundamentalist Islamic preacher – he sets out to trace his roots.

Not having too many Jews he can refer to in his inner circle of friends, he ends up befriending his nemesis – the local black cab driver Lenny Goldberg (Richard Schiff), an American Jew who got stranded in Ilford when his wife left him.

When Mahmud finds out that his birth father is on his last legs in a local Jewish nursing home, he rushes round to try to meet him. But the rabbi (Matt Lucas) refuses to let him anywhere near his father until he can prove his Jewish credentials, so Lenny does his best to teach him everything he needs to know.

But all the while, his son is pushing him to become a better Muslim, to impress the fearsome fundamentalist whose daughter he’s desperate to marry.

Making comedy of religion is always a brave thing to do and many film-makers don’t quite have the courage of their convictions, not least because pushing it too far will alienate believers.

In last year’s The Invention of Lying, Ricky Gervais launched a fierce attack on the Judaeo-Christian beliefs, but tried to soften the blow by disguising the film as a romantic comedy. Bill Maher’s documentary Religulous was more venous in its attack on organised religion, preaching only to the converted.

But here, writer David Baddiel tries not to attack religion at all and instead makes gentle fun of the people who practice Judaism and Islam – at both extremes – from liberals to fundamentalists.

In so doing, almost without question, every character we meet is necessarily a blunt stereotype – from the hook-handed henchmen of the extremist Islamic preacher to the organisers of the local women’s Jewish guild, collecting signatures for their “support Israel” petition at a bar-mitzvah.

But for a film that’s made by people with roots in both faiths, it’s uncomfortable how distant most of these caricatures are from reality – we have Muslim women covering themselves at home, when there are no men around and no rabbi would stop a son connecting with his dying father until he can name the five books of Moses – in Aramaic.

Consequently, the obstacles that are put in Mahmud’s way as he struggles to explore his two identities at the same time feel so contrived as to take the film out of the realms of realism, which largely destroys any impact that the satire might have.

It contains many in-jokes that each community will recognise but will alienate outsiders and much of the humour is too tame to challenge anyone.

Worse is the fact that many of the set-piece gags are simply not funny. Talented a comedian as he is, Omid Djalili’s attempt to deliver an impromptu speech at a bar-mitzvah he’s gate-crashed as part of his training is neither funny nor, in any sense, believable.

And in its attempt to keep everyone happy at the end of the film, the status quo has to be restored, with everyone involved being just a little bit wiser and more experienced.

This is the world of TV sitcoms at best and slapstic comedy sketches at worst. It does not reflect any kind of reality anyone familiar with the east London Jewish or Muslim communities will recognise. And it certainly doesn’t belong on the big screen.

The premise is a winner – and the writer and star have tremendous comic provenance – but the resulting film is a low-key disappointment that lacks ambition. It doesn’t aim for the stars.

And from an up-and-coming director whose previous work – such as the short Ex Memoria – were as visually arresting as they were emotionally moving, this feels tremendously flat.

The Infidel would provide a good-natured afternoon in front of the TV – as it’s not without its merits. It’s often fun and in amongst the corn, there are plenty of good gags and sharp observations.

But it’s lack of ambition – both satirically and visually – leaves you feeling that it was a missed opportunity.