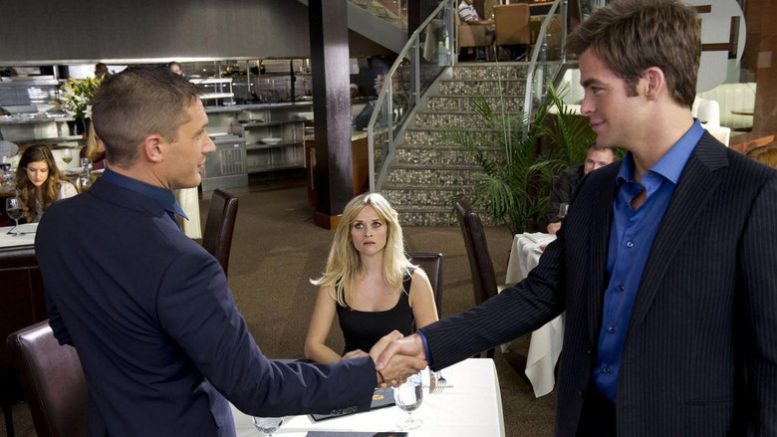 Gorgeous and hunky charmer FDR (Chris Pine) and rugged but sweet romantic Tuck (Tom Hardy) are highly-trained CIA officers – and best friends both in and out of work.

As best friends do, they gossip about girls and are excited to discover that they’ve both recently started dating a girl – less excited when they realise that it’s the same girl, Lauren (Reese Witherspoon).

With half of the office staff falling behind each of them, all friendship is thrown out of the window as the pair go to war over Lauren, each determined to use spy gimmicks and skills – and more traditional dating tactics – to out-do each other and win her heart.

Overwhelmed by the attention, confused by which way to go and – of course – unaware that the men have discovered their shared romantic interest, Lauren seeks advice from her wise-cracking best friend Trish (Chelsea Handler).

Romantic dinners, trips to the zoo, dart guns, fine art displays and all the toys and computers the CIA can muster play into the battle that FDR and Tuck are facing against the toughest opponents of their careers – each other.

The idea of any attraction being thrown out of the window and the dating game being all about beating their colleague rather than winning Lauren’s love is fun, taking macho competitiveness to a whole new level.

But too much about it just doesn’t feel right.

None of the operation of the agency seems at all convincing, from the layout of the office to the deployment of officers. Why is there a British man (Tom Hardy, making no effort to disguise his English accent) working for the CIA? How do these top class agents find the time and resources to pursue such frivolous ends? Are we supposed to root for a woman who is knowingly two-timing two men who, as far as she is aware, are innocently and enthusiastically giving their all to woo her?

The peculiarly monikered McG ensures that the plot zips along at a rip-roaring pace and choreographs much of the physical comedy well, but the film’s main failing is that once the plot becomes clear, there’s not one central character that we can feel for. The men are, in effect, using the woman to massage their pride while the woman is massaging her own pride by two-timing her suitors to show that she’s “got it.”

Lauren’s best friend Trish is the funniest and most likeable character, which is clearly a weakness in the structure – much as Will & Grace were never the best characters in the sitcom that bore their name.

The film is little more than an incoherent series of entertaining sequences that work well on their own, but fail dismally when linked together – and the denouement, presented as a shock is so pedestrian as to undermine much of the rest of the film.