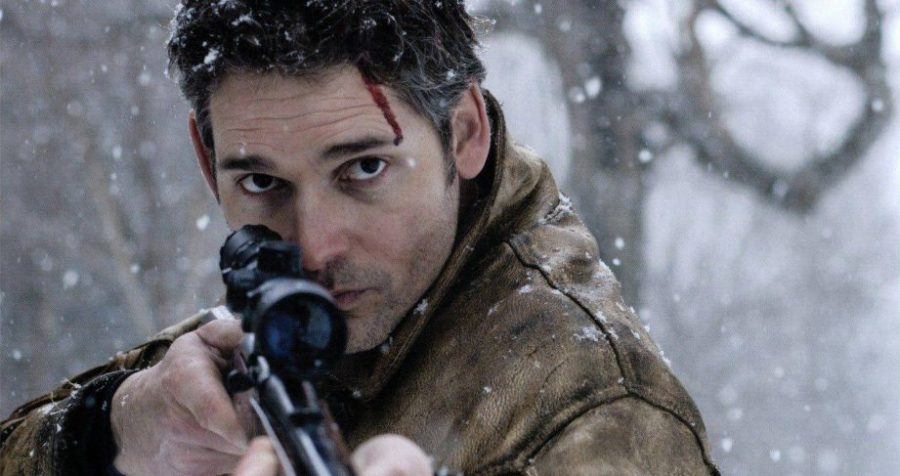 Addison (Eric Bana) and Liza (Olivia Wilde) have just pulled off a daring casino heist. Their getaway driver is killed as the car spins off the road in icy conditions.

Addison says their chances of getting away will be better if they split up, so Liza does as he says.

Struggling in the severe weather, she hitches a ride with Jay (Charlie Hunnam), a former boxer who’s just got out of prison and is heading to his parents’ house for Thanksgiving, after having an unfortunate reunion with his former trainer. His disapproving father (Kris Kristofferson) is resisting his mother’s (Sissy Spacek) pleas to give him second chance.

The local sheriff Becker (Treat Williams) mobilises his men to catch the fugitives, but leaves his only female deputy, his daughter Hanna (Kate Mara) back at base as he doesn’t trust a woman with real police duties.

But answering another emergency call, Hanna finds herself on the trail of the fugitives herself.

And as luck would have it, after a bloody gunfight with police, Addison turns up at the home of Jay’s parents, setting the scene for an explosive finale.

While being dressed up as a bloody thriller, Deadfall is really about family relationships.

There’s the almost incestuous relationship between brother and sister Erica Bana and Olivia Wilde. There’s Kris Kristofferson’s disappointed father to Charlie Hunnam’s rebellious youth. And there’s Treat Williams’ chauvinistic police boss whose main gripe with the world seems to be that he had a daughter rather than a son.

While any one of these stories might have enough scope for further development, squeezing them all into a thriller about a botched heist getaway is either somewhat clumsy or hopelessly optimistic.

On many levels, there’s enough going on to keep audiences entertained, but much of the action and even the back-stories are cliched and the thriller and social drama elements feel unbalanced, to the extent that the film doesn’t seem to be clear what it wants to be.

Most of the enjoyment comes from Eric Bana’s faux-politesse as he confronts Sissy Spacek, and the snow-mobile chases are fun. But much of the rest feels a little heavy handed as several films are fighting for screen-time.

From the director of the Oscar-nominated Austrian film The Counterfeiters, a little more coherence might have been expected, but it would be churlish to suggest that Deadfall was dreadful.