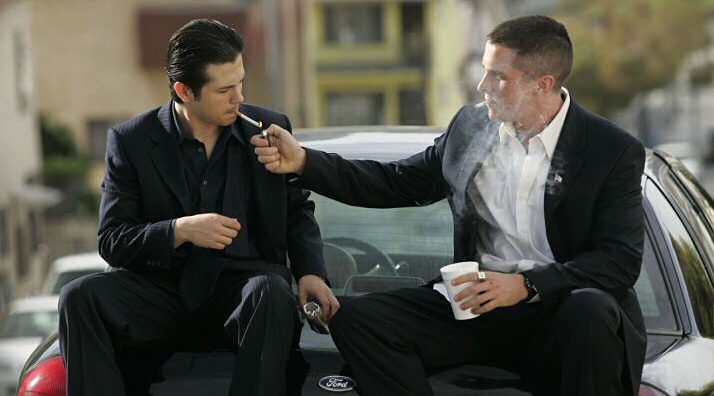 Jim (Christian Bale) had an honourable discharge from the US Army after the second Gulf war, and after years of post-traumatic stress, he’s finally trying to get his life back on track.

He’s confident of securing a job with the LA Police Department – after which he’ll be able to marry his Mexican girlfriend (Tammy Trull) and bring her to the US.

For his best friend Mike (Freddie Rodriguez), meanwhile, his fortunes have turned. Having helped his girlfriend Sylvia (Eva Longoria) through law school, he’s now a kept man and she’s not happy. She orders him to find a job.

As we meet Jim and Mike, their attempts to secure jobs are going nowhere – Jim is unexpectedly rejected by the LAPD and Mike never even seems to get around to delivering his CVs, as the friends find themselves dossing around town, like a pair of teenaged slackers, screwing up their lives – both professional and personal.

The more things don’t go to plan, the less they seem to care about their plans – and the more their lives degenerate, as both men slip further away from the dream they both have of settling down.

From the description, you’d be right in assuming it’s a hard-boiled, gritty, urban drama.

From the cast, you’d expect strong performances – and Bale certainly delivers another impressive turn, off the back of Batman Begins and The Machinist.

But the story itself isn’t entirely convincing. There are many occasions when cinematic convention would have you expect them to get caught by the authorities, but they keep getting away scot-free. Dramatically, that’s the wrong way round – if you think someone’s going to get away with something and then suddenly, they get caught – that’s drama. If the mood of the film dictates that they should get caught and they don’t, it just seems like lazy film-making. It all seems too convenient.

Also, there are certain events that in a comedy or a feelgood film would be admirable, but in a hard-bitten, downbeat drama, they seem incongruous.

These include one of the most corny, Hollywood nick-of-time endings in cinema this year, which is just so out of place in such a gritty real-world setting.

It all makes the film seem a little confused and lacking in identity. It’s not true to its roots.

As a piece of powerfully played, low-budget drama this works, but it’s nothing like as profound or successful as it thinks it is. It takes itself much more seriously than its plot warrants.