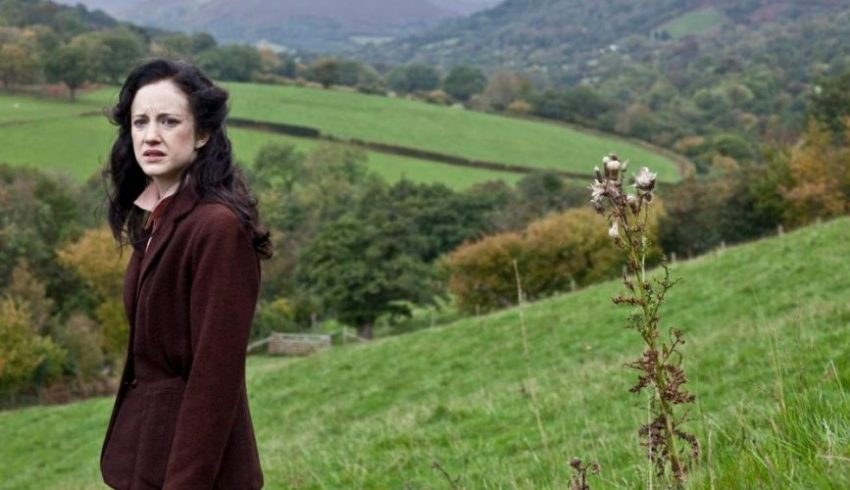 In this alternative version of history, the D-Day landings failed and Germany invaded Britain towards the tail-end of the second World War.

As Nazi troops pushed their way north and west across the UK, a small group led by Albrecht (Tom Wlaschiha), arrives in a small village in the Welsh valleys with a particular mission in mind.

All the town’s mensfolk have disappeared, leaving the women to fend for themselves – foremost among them is Sarah (Andrea Riseborough).

As the days pass, the Germans become attached to the area and end up helping the abandoned women on the farm.

In the absence of her husband, Sarah begins to fall for the affections of Albrecht, who seems increasingly content to stay with her, rather than continue the murderous Nazi advance across western Europe.

When this fraternising with the enemy looks set to be exposed, Albrecht has to flee the valley – but will Sarah agree to join him?

Twists on history are often interesting creative endeavours – Tarantino’s successful assassination of Adolf Hitler in Inglourious Basterds is a recent case in point.

But this war film has none of Tarantino’s pizzazz. The main criticism of Resistance is its languorous pace. There’s a lot of people walking, sitting and talking, rather than the usual running, shooting and shouting you might expect from the genre.

The locations, costumes and props give a good sense of the period and the rolling Welsh countryside is a character in its own right, but the general set-up – the disappearing menfolk – feels a little arch and under-explored, for the film is more about the relationship between the Nazis and the women than it is about what’s happened to the men. Have they run off to join the resistance or have the Germans been knocking them off, one by one, as they encounter them?

The idea that married and in-love Sarah might even consider running away to start a new life with a Nazi soldier who’s taken over her village doesn’t really wash, which makes you feel that the film-makers are leading you on a little.

Some of the supporting characters are a little archetypal or underused – Nazis with scarred faces, just to show us how bad they are – and Michael Sheen’s resistance-leader who doesn’t seem to be doing much resistance-leading – I’m sure Tarantino would’ve taken Sheen’s storyline in a different direction.

Another difficulty is its inherent grimness – there’s not even an attempt at humour throughout – OK, so there’s not much fun to be had in a Nazi invading force taking over your village, but if 50/50 could find bitter-sweet humour in cancer, a smile or two might at least have brought these characters to life a little – particularly if we’re being asked to believe that there’s a bond developing between the enemies.

It’s an interesting idea, with good enough lead performances and emotive cinematography, but it doesn’t feel adequately explored and the specifics of the plot fail to convince, making it hard for audiences to connect with the characters or believe their motivations.

It’s a film you won’t have much difficulty in resisting.