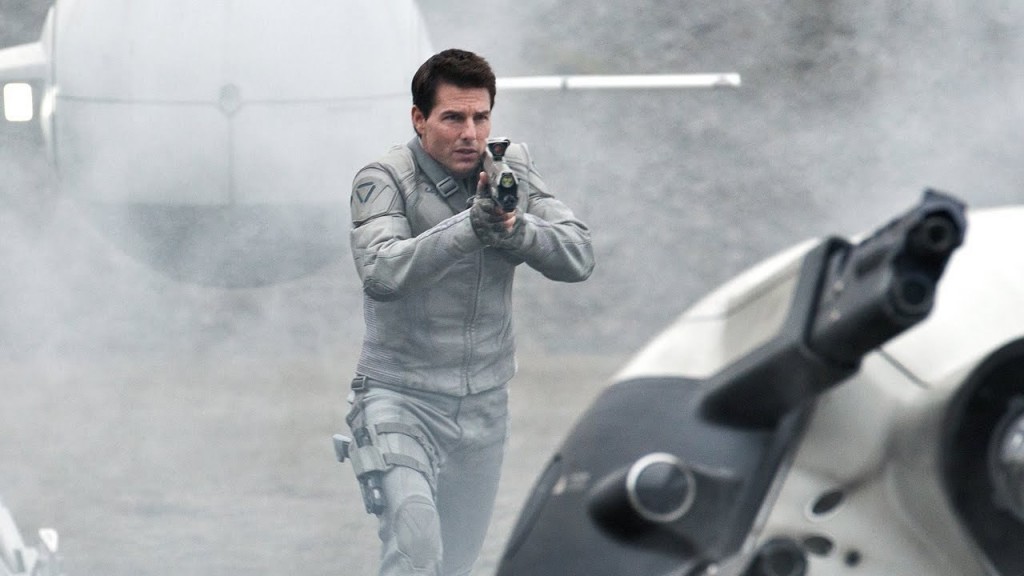 It’s 2077 and an alien race, known as The Scavengers, have traveled across space, destroyed the moon and attacked Earth.

The humans won the ensuing war, but the cost was so great that the planet was left all-but-uninhabitable, with survivors all being sent to live on Saturn’s moon Titan.

The journey across the solar system is powered by huge generators, sucking up energy from Earth’s oceans. They’re protected from the Scavengers by dozens of drones and a team of two, Jack (Tom Cruise) and Victoria (Andrea Riseborough) are coming to the end of their stint down on Earth to keep an eye on the drones and fix them when they break.

But when a spacecraft crashes down in a nearby location, specified by a transmission he believes came from the Scavengers, Jack starts to question everything around him, why he’s there and who he’s working for.

The first narrative problem with this film is that it has to begin with an expositional monologue from Tom Cruise to explain the world the viewers are about to inhabit – essentially, the first three paragraphs above. Coming from a reviewer, summarising the plot, you’d expect it – but not coming from the lead character. It’s a problem that so much knowledge of the backstory is required to make sense of what’s going on in the present – and it just sounds a bit clunky.

But it’s also one of those films that, from a narrative point of view, is hard to talk about without giving away more than the film-makers might like.

There’s a lot going on – but to disclose the nature of the people Jack meets and how they fit into the picture would be to spoil some of the fun – suffice to say that there are rebel human survivors down on earth, astronauts who’ve spent decades orbiting the planet in suspended animation, and there’s a death-star style object hovering above them all the time, keeping an eye on everything that’s going on.

The relationship between Jack and Victoria is interesting at first, but she seems – necessarily – to be so cold and unemotional that it just doesn’t seem like a particularly enjoyable existence for either of them. Hence why they’re looking forward to ending their contract and heading to Titan. But watching two people who aren’t particularly interested in what they’re doing, or each other, doesn’t make for especially entertaining viewing.

The film is visually engaging – the clean lines of the futuristic home-office set-up and the space-age light aircraft Jack uses to find and fix broken drones compliment the post-apocalyptic feel down on earth. And recognising surviving landmarks, such as the top of the Empire State Building and, of course, Liberty’s torch, helps to put things in perspective.

But from these landmarks, to the humans in suspended animation, the remote authority figure, pod races, the death-star and rag-tag group of human rebel survivors, there has almost certainly never been a film that has borrowed so heavily from so many other films with the sci-fi genre. It’s astonishingly derivative – coming from the mind of a director who’s clearly a fan of the genre, but can’t quite find a better way to deliver his vision than to compile a “sci-fi greatest hits.”

Although I won’t give it away, the twist becomes evident fairly early in the film, if you’re paying attention, but this isn’t really a film about paying attention and trying to work out what’s going on. The story is unconvincing enough for this not to be where the enjoyment derives. At its best, the film has some interesting things to say about memory, survival and humanity, and the action sequences are as impressive as the imaginative visuals – but from a narrative and emotional viewpoint, Oblivion is somewhat empty.

Cruise himself is engaging enough, but few other characters have much to do – and Morgan Freeman, as an underground rebel leader, does little more than sit in dark rooms, speaking words as deep in pitch as they are supposed to be in meaning.

When the publicist stands up to introduce a press screening of “Bolivian,” you know that they don’t quite have the confidence in Tom Cruise’s latest high-concept sci-fi film as they might have hoped – and rightly so. When considered as the sum of its parts, it’s just a little underwhelming.