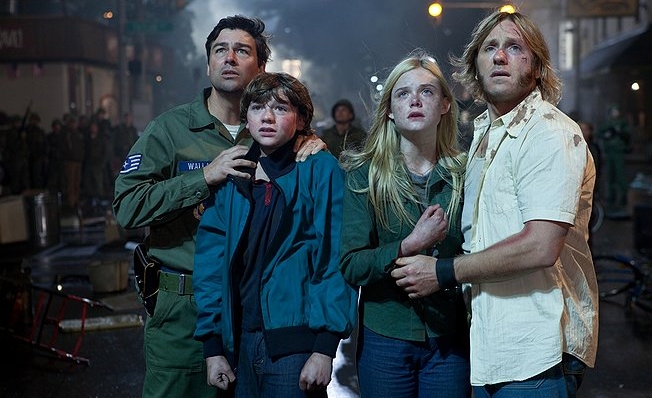 It’s summer 1979 in a small-town in Ohio and young Joe (Joel Courtney) has just lost his mother in an industrial accident that was caused by a neighbour Louis (Ron Eldard).
Joe’s father Jackson (Kyle Chandler), a local sheriff’s deputy, is finding it hard to cope, looking after him alone.
Joe spends most of his spare time helping his best friend Charles (Riley Griffiths) shoot short films on his Super 8 camera. Charles’s latest project is an ambitious zombie film. He’s taking it so seriously that he’s even managed to persuade the hottest girl in school, Louis’s daughter Alice (Elle Fanning), to be the lead actress.
One evening, Joe, Charles and the rest of the gang gather at the railway station after lights-out to shoot a crucial scene. Charles is very excited to see a train approaching; he’ll be able to get great production value.
But moments after the train passes, there’s an explosion. The carriages are thrown from the tracks, sending mysterious debris flying in all directions, causing serious, widespread destruction.
As the kids run for cover, the camera continues rolling.
At first light, Jackson leads the local police in to try to clear up the devastation, but the military moves in and takes over the operation.
The troops are keeping the secrets of the train close to their chest, and the only man in town who knows what’s going on is soon taken into custody.
As if the townsfolk aren’t suspicious enough of the military activity, electrical appliances and car parts keep disappearing.
But when the kids get their film developed, the secrets start to emerge.
An alien has become stranded on earth and is trying to find a way to get home, while the military is doing all it can to stop it.
When the situation gets out of hand, the whole town is evacuated, but the children manage to sneak back to uncover the truth.

Set three decades ago, starring children with bikes, from single-parent families in small-town America, with a stranded alien trying to get home, you could be mistaken for thinking you’re sitting down to watch ET. And for those of JJ Abrams’s generation, Super 8 will make you feel just like you did the first time you watched Steven Spielberg’s sci-fi classic.
This time around, the master is taking a back seat as the executive producer, allowing Abrams – about the age of his leads when ET came out – to take over the directing duties.
Complete with the film-making storyline, Super 8 is Abrams’s love-letter to science fiction, old fashioned movies and old-fashioned movie-making.
We might as well be watching Abrams – or Spielberg – in their own childhoods, struggling to make a film, with the inconvenience of having an alien turn up and get in the way.
This film has everything from the mystery and intrigue of an alien invasion to the familial strife of a working class drama to some heart-breaking childhood bonding, including one of the most beautiful and innocent love affairs the big screen has ever seen, between Joel Courtney’s Joe and an astonishingly powerful Elle Fanning as Alice.
The eccentric supporting children – such as Riley Griffiths’s auteur and Ryan Lee’s pyromaniac special effects geek – are a joy to watch too.
With all this in mind, it’s devastating to say that this nostalgic tour de force literally loses the plot in the final reel. The touching drama and coherent pseudo-science degenerate into the neat, tidy, predictability of the Hollywood formula that gives us races against time, logic conveniently breaking down and everyone looking on in awe as right-thinking people in the audience scowl and think “no!” as they see what had amounted to a credible story floating into space with the alien antagonist.
But any frustration at the denouement will soon evaporate, leaving younger viewers with the Spielberg feel-good factor and older folk wondering where they life has gone, having been whisked back to their childhood for two mostly glorious hours.