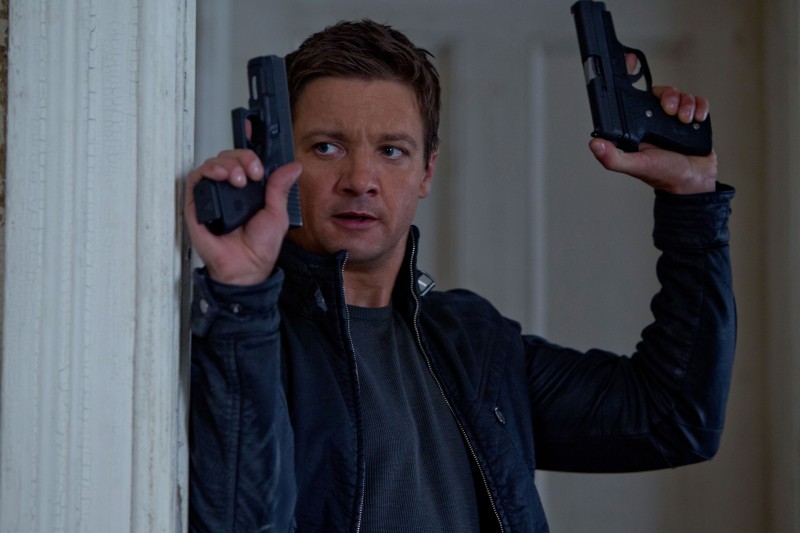 Rogue CIA agent Jason Bourne has been in touch with a Guardian journalist and some of the American government’s most secret spy programmes are about to be exposed.

Byer (Edward Norton) is tasked with closing down the programmes that are most at risk before their secrets are revealed.

One by one, the CIA starts cleaning up the mess by knocking off its highly trained agents and others involved in the programmes.

But – and this should not have surprised them – one of their highly trained agents is so highly trained that he’s able to outwit those who are prepared to go to any lengths to dispose of him and any trace of his existence.

This agent is Aaron Cross (Jeremy Renner), who needs the help of programme doctor Marta Shearing (Rachel Weisz) to boost his powers to help them both evade their former bosses who will stop at nothing to keep their secrets safe.

“There was never just one,” says the poster, as if we’re supposed to be surprised to discover that Jason Bourne wasn’t the only CIA super-spy – we know this already, if we’ve seen the previous three films, as in each, other CIA super-spies are sent to dispatch him.

When we first encountered Jason Bourne, it was thrilling – we didn’t know who he was and neither did he. We were with him as he discovered who he was and what he had to do to stay alive.

After three highly successful and groundbreaking films, the studio was determined to continue the franchise – Bourne’s legacy, if you like – and when the actor (Matt Damon) and director (Paul Greengrass) of the three and two of the previous films, respectively, pulled out of the project, it had to find a way to keep the world alive convincingly.

Offering Tony Gilroy – who wrote the previous trilogy and directed the critically acclaimed Michael Clayton – the chance to write and direct would at least give the project some continuity and he’s brought with him a handful of minor characters from the earlier films, although in smaller roles than the trailer would have you imagine.

Having this story overlap the Bourne Ultimatum, chronologically, was an interesting touch – it immediately puts you in the same world and gives some context to the plot.

But in truth, without Greengrass’s frenetic and energetic direction and Damon’s vulnerability, proficient as it is, film number four becomes little more than a cat-and-mouse film.

The chases and fight sequences are exciting enough, but not on the same scale as those in the previous films. The back story is a little contrived. Grounding Aaron Cross’s project in science provides him with the all-important female side-kick.

But try as it might, despite effective choreography and spectacular locations that would provide enough airmiles for the most hardened traveller, the characters are less appealing and less sympathetic, the story is less convincing and the direction is weaker.

Too often, the plot seems to unfold unnaturally conveniently and inevitably, all eyes are on Jeremy Renner to see how he fills Matt Damon’s shoes; he’s not as strong an on-screen presence, but that’s partly because the character itself is just less interesting. There is little opportunity for any personality to shine through, as he darts from one location to the next.

To try to give it more continuity, they might have kept the same heart-pounding incidental music, but only a burst of Moby over the final credits will make your ears feel at home.

The highly unusual Monday release might be the only way it can rake in enough at the box office to make the kind of impact the previous Bourne films might have done in their opening weekend.

While it’s not a bad film, it’s not a patch on its predecessors, but it’ll probably be successful enough for the studio to give their new man another outing.