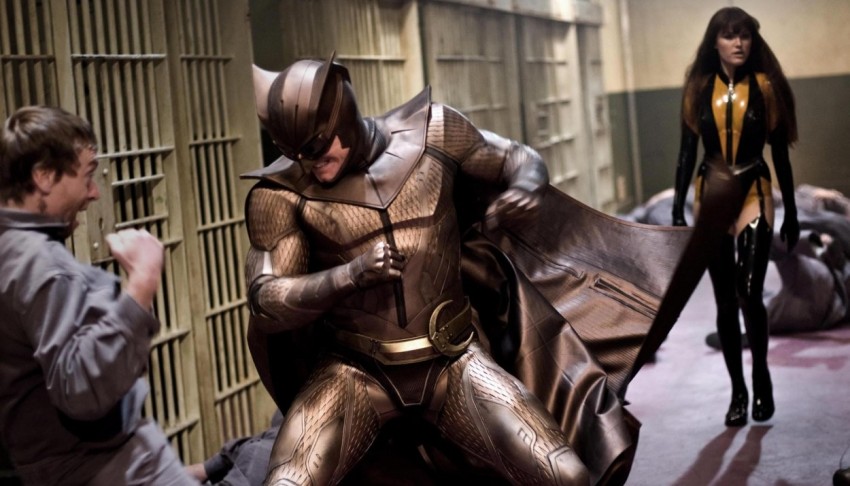 It’s 1985, in an alternative world Richard Nixon is serving his third term as President, the US won the Vietnam War and America and Russia are on the brink of breaking a pact which could lead to a nuclear war.

A group of masked heroes — known as the Watchmen — used to keep the city safe, but they’ve long since been outlawed.

But when one of them is brutally murdered during his retirement, another one — Rorschach (Jackie Earl Haley) — concludes that someone is out to kill every last one of them.

Adrian (Matthew Goode) -– now a Richard Branson style uber-businessman –- is sceptical about this warning, but others take the threat more seriously.

The Watchmen are hoping that Dr Manhattan (Billy Cruddup) – a blue, glowing giant, created in a nuclear accident several years earlier – will be able to save the world from a nuclear holocaust, but he has his own agenda, sending his relationship with Laurie (Malin Akerman) into turmoil.

And Dan (Patrick Wilson) is itching for an opportunity to jump back into his costume and start playing with his toys to save the world again.

OK, so this might sound like quite a lot to take in – and more’s the point – to take seriously. The plot is tremendously bulging and complex.

It’s largely a film about heroes who don’t actually have superpowers, as such. They’re more like Batman – regular people who are really good at martial arts and have costumes designed to scare off the bad guys.

The only one who’s really anything special Dr Manhattan, whose brush with a nuclear reactor some years earlier has left him able to do pretty much anything.

Against the paranoia of there being “someone out to get them” — there’s also a love triangle — and it’s all set against the backdrop of the political paranoia of an impending nuclear war — and the big question of whether it’s OK to sacrifice a few to save the many.

There are some big ideas here — told using some unprecedented cinematic tools and the kind of tough, comic-book violence last seen in Sin City — and to skew the time-scale, the sound-track is filled with songs from the 60s to the 80s, from the likes of Bob Dylan, Leonard Cohen, Simon and Garfunkel, Jimi Hendrix and Nena.

The film takes itself very seriously and there’s little humour here, although there are some neat nods to more familiar figures in the superhero world.

Other directors — including Terry Gilliam and Paul Greengrass — tried to have a go at bringing this comic book to the big screen — and it’s fallen to Zack Snyder — who made 300 — to squeeze in as much of the book as he could — one of the biggest problems with this film is that it took him a shade under two hours and forty minutes to tell it.

But if the idea of a long, though-provoking super-hero movie, which tackles a broad range of mature themes, doesn’t scare you in principle, it’s worth sitting this one through.