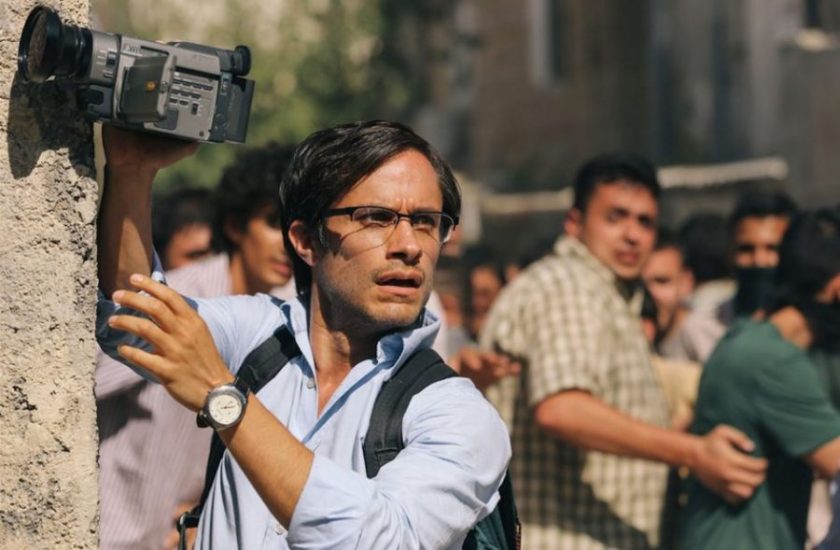 Iranian-born journalist Maziar Bahari (Gael García Bernal) returns to Tehran to report on the election for the American magazine Newsweek. To the frustration of his pregnant wife (Claire Foy), he decides to stay on and cover the aftermath when Ahmadinejad’s victory is questioned.

After filming a protest, he receives a visit from Iranian intelligence officials at his mother’s home; they take him into custody, accusing him of being an American spy.

For more than four months, he’s held in solitary confinement as the authorities try to break him, with daily interrogations and emotional torture to try to get him to admit to his crime.

His crime, according to the authorities, is spying for the Great Satan. For him, he’s just reporting the truth.

The true story of Maziar Bahari was a cause celebre for free speech at a time when there was none in Iran. The film might have had more impact had it been made before Ahmadinejad was finally replaced by the more moderate Hassan Rouhani. That said, Iran is still not a country where journalists might feel comfortable openly reporting the truth.

Rosewater is one of those films that highlights something most people would find astonishing and outrageous but about which no viewer could do anything. Little would be gained by angry viewers writing to the Iranian government to complain about their treatment of journalists – in 2009.

That said, Bahari’s experience highlights the difficulties in bringing the truth to the world from troubled areas and it also shows how having international connections can help protagonists receive more favourable outcomes.

A film about Iranian espionage interrogations with few recognised stars is not perhaps an obvious choice for the satirist Jon Stewart, from American TV’s The Daily Show, to pick as his directorial debut, but its examination of the use of the media as a weapon – as he does on his show – makes it more of a comfortable fit.

He largely succeeds in telling the story – on the whole, it flows well and is largely coherent. It doesn’t adequately explain exactly what the Iranians want from Bahari, although that’s kind of the point – as he has no idea either.

The casting is slightly odd, with one of the leading Latino actors, Gael García Bernal, taking the central role, alongside a handful of little-known middle-eastern actors – all of whom speak English in their native accent, which raises the question – why not make the film in Persian with Iranian actors. A handful of cameos from real-life journalists work with varying degrees of success, depending on their ability to act…it’s odd seeing people unconvincingly playing themselves.

Stewart isn’t at his best conveying the passage of the four months of captivity – watching Bahari pacing around his cell, being questioned by the chief interrogator, having imaginary conversations with his subversive late father, writing graffiti on the walls and so on, felt like four months.

He also employs the over-used technique of starting the film in the middle of the story, flashing back and then continuing from the starting point, for no real narrative purpose.

Rosewater works on a number of levels – crying for freedom of expression in Iran and beyond, presenting the hopelessness and helplessness of being on the wrong side of injustice, highlighting the usefulness of famous friends – but for his first feature, Stewart relies on a few too many cinematic cliches.