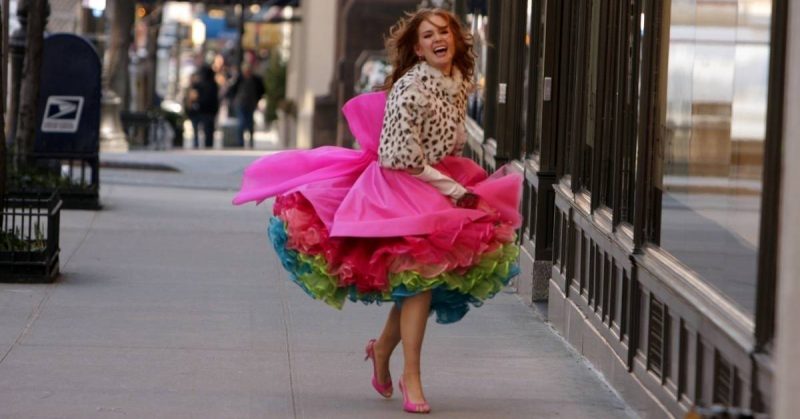 Gardening journalist Rebecca Bloomwood (Isla Fisher) would rather be working on a Rag Mag, as her appearance – dressed from head to toe in designer clothes she can’t afford – testifies.

When a job becomes available at Alette magazine, she scrabbles around for the cash to buy a green scarf to top off her interview outfit, only to arrive at the office to find the job has already gone.

She’s advised to take a job at a financial publication in the same group, with a view to moving up to Alette in the future, but what does she know about finance?

She’s up to her eyeballs in debt and has a collector on her tail, day and night.

But through a combination of good fortune and good will, her naivety pays off, as her editor Luke (Hugh Dancy) gives her a down-to-earth column of her own, that becomes a sensation.

So successful does she come, that the head of Alette (Kristin Scott Thomas) turns up on her doorstep, offering her a position on the magazine of her dreams – but after the journey she’s been on, is this really what she wants?

This is one of those films that – as the advert says – does what it says on the tin. A shopaholic confesses her addiction to shopping. It’s better than men, she makes clear, right from the start.

The film follows the same path – sometimes, it’ll take you with it and its gentle humour – but other times, it’s emetic moralising will generate a frustration and rage within you that will have you screaming at one clichéd plot point after another – or protagonists who act completely out of character in order for the corny story to shudder to its obvious conclusion.

Fans of the books on which the film is based – and the target audience of young teenaged girls – probably won’t mind the cliché-ridden incoherences, so for it’s very specific audience, the film will work.

But you won’t find many guys in the cinema – unless their doing some kind of penance for a misdeed towards their girlfriends.

For the right audience this will be a hit, for everyone else, you’ll want to take it back – or at least wait for the sales.