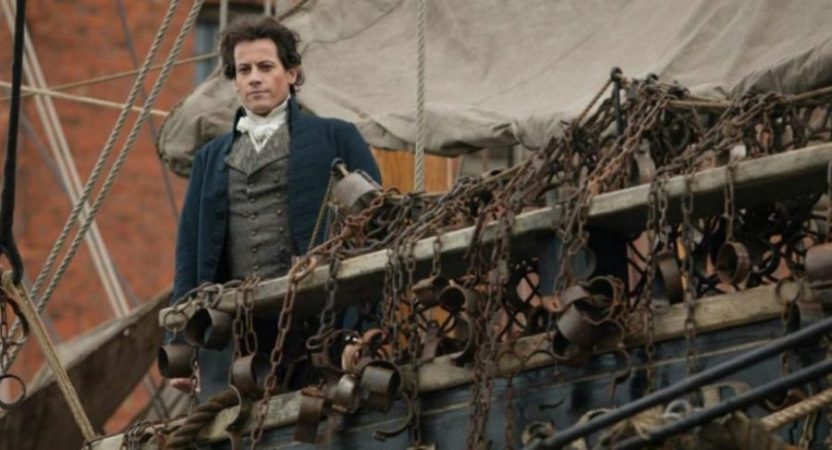 Towards the end of the 1700, there’s a growing feeling that perhaps the Slave Trade isn’t as defensible as it once was.

Hull MP William Wilberforce (Ioan Gruffudd) has frequently failed in his attempts to get parliament to abolish it – and having given up, heads to the country to wind down.

Meeting wealthy but liberal socialite Barbara (Romola Garai), he’s persuaded to have one final try to convince his fellow MPs, many of whose constituencies depended on the trade, that banning the shipments of human cargo across the Atlantic would be good for their soul, if not for their livelihoods.

Having his best friend William Pitt (Benedict Cumberbatch) rise to the office of Prime Minister doesn’t do his cause any harm, but illness and continuing determined opposition from people in high places conspire to make his life’s aim a tough task.

The film-makers decided to keep this political drama very much political and personal, so pretty much all we see is a British MP, alternating between making speeches in the House of Commons and lying in bed, with colitis.

So we learn quite a lot about the decision-making process in early nineteenth century Britain and we learn how William Wilberforce coped with his inflammatory bowel disease.

But while we hear a lot of people saying “slavery was really bad,” we never actually see any slaves suffering – we kind of have to take the liberal campaigners’ word for it.

To be fair, we also don’t see the port-workers whose jobs depended on the slave trade moaning that they’ll be out of work – their MPs do that for them.

It’s not that anyone in their right mind would – or should – want to see people suffering, but isn’t that what cinema is about? Showing how bad things were, rather than just showing people talking about it?

As another example of how the “white man” saves the world, Youssou N’Dour’s is the only black face in the whole film as a former slave, now campaigning against the trade.

The film, ultimately, is a bit of an acting showcase – Gruffudd get to play everything from bold to sickly, Finney dons sack-cloth-and-ashes, Gambon and Jones also have enjoyable caricatures.

But ultimately, it’s a rather low key, worthy and small study of a huge issue that’s left historians arguing about its accuracy.

And for a film about an issue that shaped world history and still, two hundred years later, rouses passion like it was only abolished last week, it’s strangely lacking in drama.