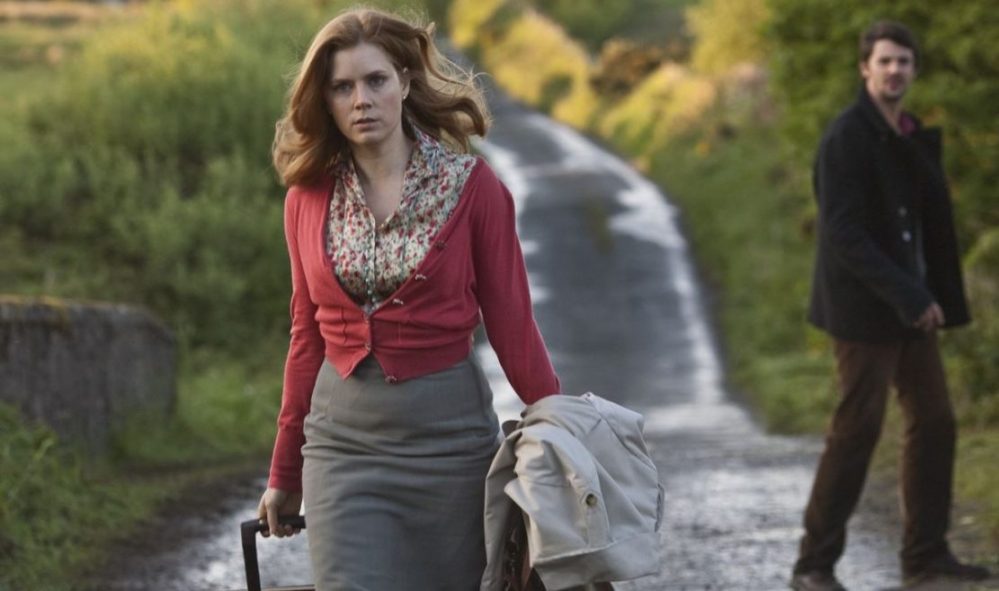 Anna (Amy Adams) is desperate to get married. Her heart surgeon boyfriend Jeremy (Adam Scott) is less so.
As luck would have it, they’re looking to move in together and being married will greatly increase their chances of getting the perfect Manhattan apartment.

But after being disappointed one time too many, Anna decides to take matters into her own hand.
As luck would have it, towards the end of February, Jeremy has to go to Ireland for a medical conference and Anna has just heard of this quaint Irish tradition – on the 29th of February, a woman can propose to her boyfriend.

Flushed with excitement, Anna packs a suitcase of her expensive clothes and follows her true love across the Atlantic.

But severe weather means she ends up in Cardiff and rather than wait for the weather to clear, she tries to make her own way across the Irish Sea. She has a deadline, after all.

When she arrives in Ireland, she stops at a local pub to ask how to get to Dublin and ends up striking up one of those hate-hate-love relationships that only seem to exist in the movies with the hunky young landlord Declan (Matthew Goode).

After some persuasion, Declan agrees to drive his spoilt little brat of a guest to Dublin, but of course the car runs into trouble and together, they run into a series of eccentric locals, whose loving naivety creates obstacle after obstacle.

It’s almost as if fate is trying to stop Anna reaching Jeremy, to allow her more time to fall in love with Declan. Do you think?!

This is one of what seems to be a growing number of the greatest crime in Hollywood – a romantic comedy that’s neither romantic nor funny.

Typical of this sub-genre of incompetence, none of the key characters is charming or likeable, making it nigh on impossible to care what happens to any of them.

Nothing feels real about this – neither the characters nor the story.

From the ditsy (but irritating, not cute) Anna and the supercilious Jeremy to the cheeky chappy Declan and a whole host of Irish clowns, we’re treated to a catalogue of humorless caricatures.

And aside from the conceit at the heart of the film (surely if a woman loves a man, she doesn’t have to wait four years to ask him to marry her), if your car breaks down, would you abandon it and head on an adventure to Dublin with the woman of your dreams – a beautiful stranger with whom you actually have nothing in common – or would you stick around for the tow-truck to arrive, maybe exchanging facebook details before sending her on her way.

The film-makers must have grown-up on one of the classic films of the 1980s, watching Kathleen Turner being led through the Colombian outback by a swash-buckling Michael Douglas in Romancing The Stone, as its ghosts can be seen throughout this disaster – from the pompous woman in her tottering heels dragging her expensive clothes along remote country roads to the mismatched couple tumbling down a muddy hillside in pouring rain. But whereas Turner and Douglas charmed us, Adams and Goode leave us cold and the situations are neither as funny nor exciting.

Our two leads are among the hottest young talent of the moment – Adams has Oscar nominations to her credit and Goode has worked with Woody Allen and can currently be seen alongside the Oscar-nominated Colin Firth – but here, both are operating well below par. Their characters have nothing in common and we get no sense of any attraction between the two – and then, suddenly, out of the blue, surprise, surprise, they fall in love. Sorry – have I spoiled it for you?

Oh – there’s also the mindless rejection of true love and chasing true love across the Atlantic (when – again – facebook would be a more sensible first step) – to highlight just two of the many incoherent cliches.

Leap Years come along only once every four years – sadly, films like this are becoming increasingly common.