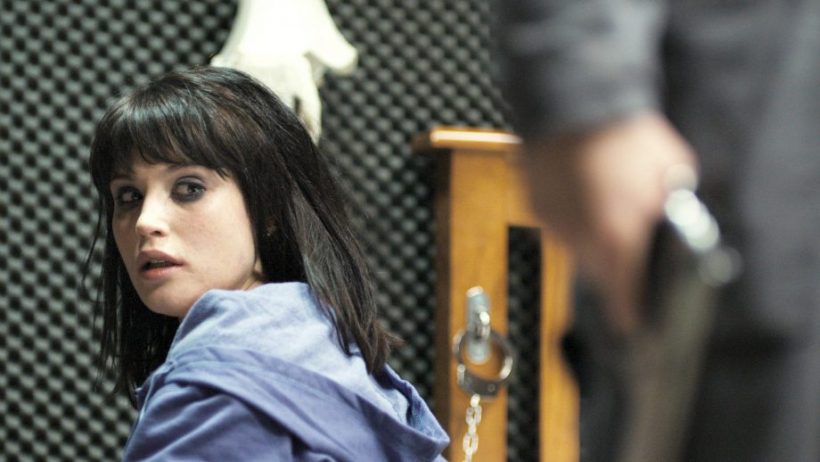 Spoilt rich girl Alice (Gemma Arterton) is brutally kidnapped by two masked men and chained to a bed in a darkened room atop a high-rise building on a grim housing estate.

Her captors are Vic (Eddie Marsan) and his young accomplice Danny (Martin Compston), whose meticulous preparation for their ransom demand must have wiped out all the local supplies of locks, chains, ropes and board to block the windows.

These kidnappers are clearly amateurs – although Vic has his head screwed on far tighter than Danny.

Vic is resolute. Danny is weaker and a savvy Alice senses it. Can she manipulate him? Maybe even form an alliance with him?

When it emerges that the choice of Alice as their victim wasn’t as random as it might have been, tension between the kidnappers ratchets up and Alice is determined to take advantage.

J Blakeson was deservedly shortlisted for a newcomer award at last year’s London Film Festival for this highly accomplished debut.

It’s beautifully shot and the thrills and the drama belie the micro-budget – largely thanks to the camera-work, fine performances from Compston and Marsan and a script which doesn’t obviously feel like an exercise in low-budget film-making – with just three actors and pretty-much just two locations throughout.

But the script does feel contrived – it’s full of twists and turns, some of which work, but others will make you groan. Likewise, some elements of the preparation and execution of their crime are effectively horrific and intricately planned to the finest detail, while others leave you wondering how two men who’ve clearly left nothing to chance could be so comically incompetent. But this film is not comic – it’s dark and humourless with almost no moments of levity, which for a film of this type isn’t necessarily a bad thing.

But once some of the twists start to emerge, the shocking believability of the situation starts to erode and what sets out – initially successfully – to be a taut thriller bursts into a flabby, incoherent action film.