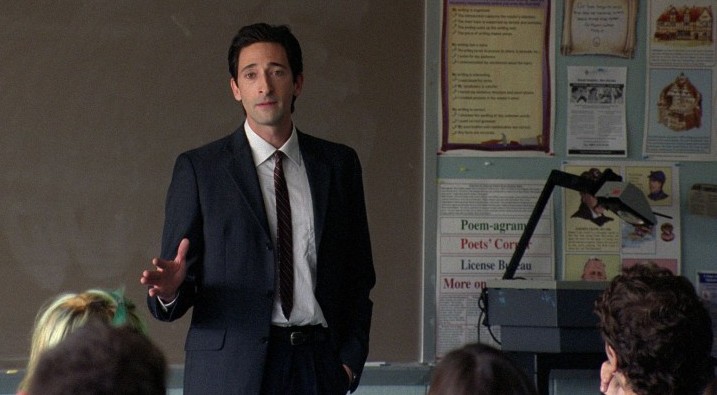 English teacher Henry (Adrien Brody) is filling in for a month at a failing New York school, where the traditional principal, Carol (Marcia Gay Harden) is being edged out as she’s failed to turn it around.

He’s a loner and what little time he doesn’t spend in the classroom, in his studio flat or the bus journey between the two is spent visiting his ailing grandfather in the hospice where dementia is clouding his final days.

One day, on the way home from the hospice, he encounters a gamine young prostitute, Erica (Sami Gayle). Despite her boisterous and cantankerous nature and his isolationist attitude, his nurturing instincts take over and he invites her to stay at his place to get herself together.

Meanwhile, back at school, he’s having trouble connecting to some of the pupils, while one – in particular – warms to him so much that he takes on almost prophetic proportions.

But it’s not just the young people who are struggling to find purpose in their lives; the teachers, deflated by the lack of interest from the pupils and their parents alike, are as miserable, in this pessimistic portrayal of the American education system.

Coming from the director of American History X, this was always likely to be an uncompromising study of the parts of life many people would rather ignore.
Rundown schools, full of pupils who are destined for jail – or at the very least, the dole queue – are certainly an area of society that warrant examination.

Bored pupils in need of direction from an inspirational teacher are also no stranger to our screens.

The subject area is well trodden and the Academy Awards love it – Precious, Dead Poets Society and the French film The Class – are just three that come to mind.
So to tackle it again, you need to offer something different. It doesn’t.

Detachment offers a strong central performance from Adrien Brody – although it’s hard to work out where he actually hopes to lead his pupils – and has a stellar supporting cast, with the likes of James Caan, Tim Blake Nelson, Bryan Cranston and William Petersen, playing disillusioned grown-ups – all in roles that seem well below their station. In an apparent attempt to return from CSI to the big screen, Petersen seems to be picking some odd roles; he also has a rather surreal one-scene cameo in one of this week’s other releases, Seeking a Friend for the End of the World.

The film’s structure is odd. It begins, When Harry Met Sally-style, with a montage of teachers unrelated to the story, talking in an upbeat fashion about why they entered the profession, before dashing their optimism – a suitably ironic twist with which to launch the film – but then the main storyline is, peculiarly, interspersed with Brody’s character pontificating about teaching – in close-up – to goodness knows whom.

With his motivations and expectations always rather cloudy, it’s never quite clear why he’s behaving the way he is – but there’s inconsistency in other characters two – as, of course, there is in people in real life.

But a film is meant to challenge us to work out what’s going on and it’s just not possible.

While the drama is, at times, powerful, and has the occasional glimpse of meaning – Lucy Liu’s school counselor provides perhaps the best indication of what is wrong at the school – it’s unremittingly depressing and pointlessly pessimistic.

What happens to the only pupil Henry appears to inspire is enough to persuade any teacher to quit on the spot.

Strong performances aren’t enough to teach us anything about the world in a film that intentionally lacks direction or purpose.