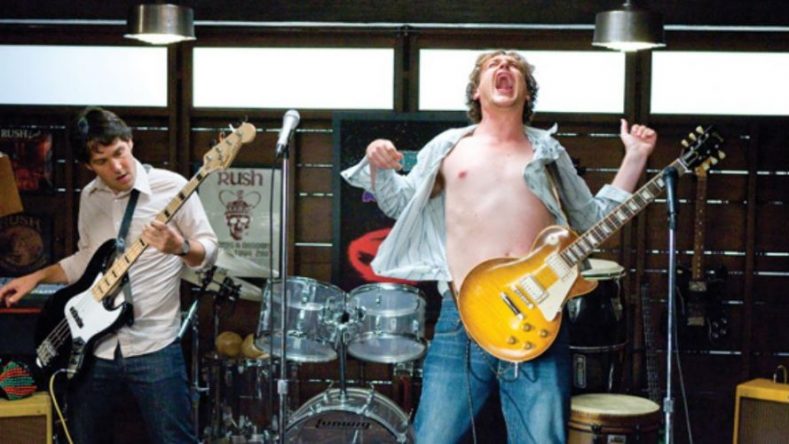 But it occurs to Zooey that all of his friends seem to be women – raising questions such as who’s going to be his best man…and why doesn’t he have any male friends?
The situation seems to be so serious that she decides he should spend less time being the perfect boyfriend to her and more time trying to find his own boyfriends.

Zooey and his gay brother set him up on a string of “man-dates” to try to find the right guy for him.

In the same way as one would see on the more traditional dating scene, Peter gets nervous and tongue-tied when he meets someone he likes and has all the same “when do I call him again?” insecurities.

But of course, the path of true like never goes smoothly, and rather than hook up with any of the guys he meets on his dates, he finds the man of his dreams, Sydney (Jason Segel), at an open-house he stages to sell the house of none other than Lou Ferrigno – cue cameo from TV’s Incredible Hulk, without green make-up.

But he soon finds himself questioning whether Sydney can actually offer him what he really needs from a relationship.

The success or otherwise of this quaint twist on the romantic comedy – a “bromantic comedy” as people seem to be calling it – hangs entirely on a charmingly original and surreal plot device and the believability of the performances.

On the first point, it’s thoroughly disarming and you’ll find yourself chuckling – even laughing – a lot, as the side-swipe at dating highlights some of the awkwardness and inconsistencies that we’re all happy to put up with when we’re looking for love.

It turns the romcom on its side – taking all the same insecurities that fill the traditional dating rule-book and using them to help a straight guy find his best man for his wedding.

At its core, this is a good-hearted comedy that feels like it comes from the stable of recent comic success run by Judd Apatow – not least fronting the cast with Knocked Up’s Paul Rudd and Jason Segel from Forgetting Sarah Marshall.

But this film falls short of the high bar set by Apatow. The script is let down by a number of rather corny and cheap gimmicks – do we really need Lou Ferrigno providing the film’s running in-gags?

There are cameos from Jon Favreau and (My Name Is Earl’s) Jaime Pressly as Zooey’s quirky best friend and hopelessly inappropriate husband (ooh – why don’t we get our men together for a game of poker?) – there’s no doubting that their scenes are funny – but they’re too contrived. Is this film set in the real world or not?

One of the finest comic actors around today, JK Simmons, is woefully underused.

And what about 70s rockers Rush turning up – to draw in the older demographic and sell a few sound-track albums.

Jason Segel, thoroughly likeable and empathetic as the leading man in Forgetting Sarah Marshall is an overbearing, supporting actor – always trying to steal the scene from Paul Rudd – as you can see from the photo above. Rudd himself, as is also notable in the photo, seems to be more comfortable shrinking into the background that pushing himself centre-stage where the comic lead should be. Charming as he is in all his supporting roles, he doesn’t have what it takes to carry a rom-com like this.

He’s an actor, not a comedian, and it shows here.

When he’s called upon to extemporise and adlib on a theme, almost without exception, he misses the mark. Getting tongue-tied when he meets someone he likes, for example, what comes out of his mouth just isn’t funny – it’s a mess. But rather than quit once he’s ahead – we get the joke – he drags it out for longer and longer – OK, so the director has to share the blame on this front. But from Friends to Role Models and Anchorman, he’s the straight man – the foil for other people’s gags – and charming with it. But he doesn’t have the originality, the deftness, the confidence or indeed the star-quality to carry off a comic lead role.

The gags are far better than the delivery.