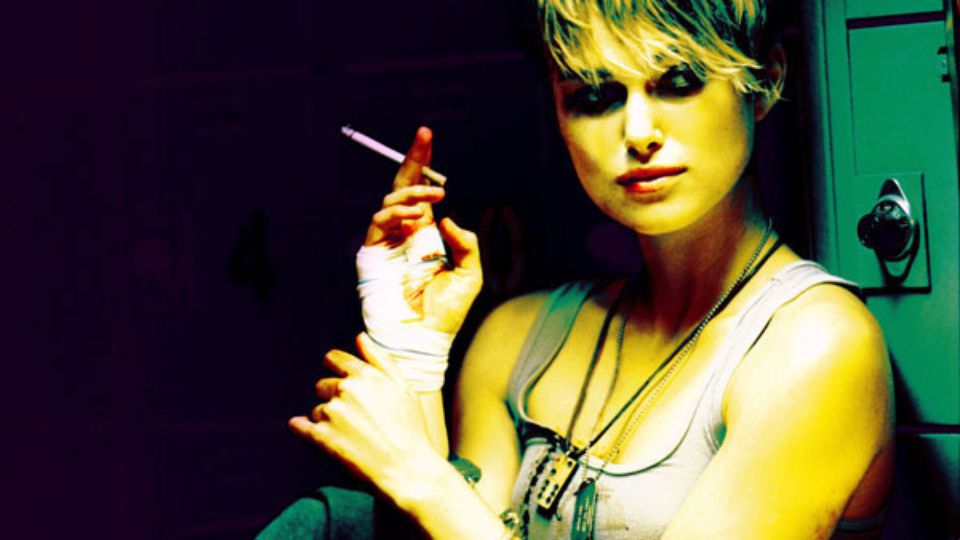 Spoilt little rich girl Domino Harvey (Keira Knightley) is taken to live in the United States when her actor father dies. She becomes a bit of a rebel and throughout her education, she never really fits in. Domino ends up leaving college and getting herself a job – as a bounty hunter.

Teaming up with the former military man, Ed (Mickey Rourke), the ruthless Latino beefcake Choco (Edgar Ramirez) and an arsenal worthy of the US army, she hunts down fugitives for the bail-bondsman Claremont (Delroy Lindo).

All goes well until a reality TV crew decides to follow the team as they trail a gang who stole ten million dollars from an armoured car – only to discover, too late, that there’s more to this raid than meets the eye.

This is unquestionably a case of style over substance – it has bags of the former (a fractured narrative, comic-book violence, unconventional cinematography and surreal and grotesque supporting characters) and very little of the latter.

It’s not even worth trying to get to grips with the story, as it’s convoluted and incoherent.

And visually, it’s tremendously derivative – it’s like Natural Born Killers (without as much killing) crossed with Ed TV/The Truman Show/AN Other Reality TV film, and being told, in flashback, from an interview-room, is hardly a novelty.

The final shoot-up resembles a scene from director Tony Scott’s own True Romance – with the hundreds of flying pillow feathers of the earlier film replaced by cash.

And a tattoo on naughty Knightley’s neck is a famous line from Scott’s brother Ridley’s classic Blade Runner.

If posh-girl Keira Knightley seems oddly cast, failing to match the likes of Mickey Rourke and Christopher Walken for true attitude, it’s because Domino is based on a real character of the same name: “sort of.” But that doesn’t make her any more convincing.

If you like greasy guys and girls with guns galore, this will take you on a fast and furious ride. Otherwise, it’ll be more of an infuriating racket.